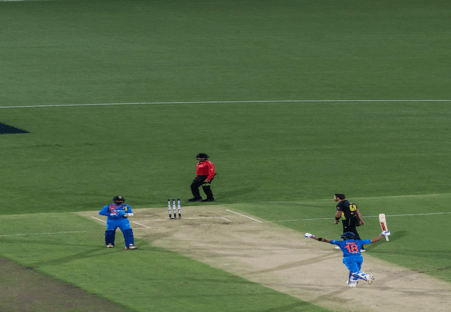 Cricket is known as the gentle man’s game and originated in Southeast England in the late 16th century. The players were exceptional batsmen or bowlers, or a combination of both. The first-ever recorded test match was played in 1877 and is considered the second most popular sport. There have been many great teams like England, Australia, South Africa and India, etc. The best cricketers of these nations have become icons and celebrities.

Below we examine some of the players who have impacted the game in all formats with bat and bowl.

Virat Kholi is a right-handed batsman who usually comes in at number three or four in the batting order. Virat Kholi is one of the most popular cricketers in the world at the moment. He was the captain of the Indian national team.

Virat also has an impeccable record in the Indian premier league, where he is an outstanding player. He started playing for the IPL team Royal Challengers Bangalore in 2008 and is still the number one batsman. Viral Kholi has won several awards, including the Arjuna Award in 2013, the Padma Shri in 2017 and the Rajiv Khel Ratna in 2018.

Abraham Benjamin de Villiers is a South African cricketer known as Mr 360 for his shot selection. He is arguably one of the best batsmen that South Africa has produced and is a wicketkeeper. AB was a phenomenon on the field and is the fastest player in ODIs to reach 50, 100, and 150 runs. He was also named ICC ODI Player of the Year three times, equalled Virat Kholi.

M.S Dhoni is arguably one of the best Indian captains and wicketkeepers ever. Dhoni is a remarkable all-rounder who can bowl and bat and is an excellent wicketkeeper. He has played for various domestic clubs. Some of them are Jharkhand, Bihar Cricket Team, Rising Pune Supergiant, and the Chennai Super Kings. Some of his accolades include the CNN Indian of the year award and MTV Youth Icon of the Year award.

A list won’t be complete without any English players. After all, they invented the game. He is one of the best all-rounders in the England squad and is known for his power hitting. He also played in the Indian Premier League for the Rajasthan Royals. Among his accolades is Officer of the Order of the British Empire and BBC Sports Personality of the year.

Dwayne Bravo brings the Caribbean flair to the gentlemen’s game. He is a West Indies cricket player and also a former captain. Dwayne is an outstanding all-rounder and has played for various teams, including Chennai Super Kings, st Kitts & Nevis Patriots, Quetta Gladiators and the Melbourne Renegades.

Put a wager on your favourite teams

Sportsbetting is a fun way to enjoy the game while staking some of your money on a match result. You can place your wagers on some of the best bitcoin betting sites that allow you to wager on your favourite cricket during a match. It adds a different way of enjoying this beautiful game.

The list is not full-scale, and there are other great players we didn’t mention. Some honourable mentions include Sachin Tendulkar, Dale Steyn, Allan Donald and Muttiah Muralitharan. All these players have enriched the game of cricket, and youngsters look up to these players. They have obtained numerous awards throughout their careers.