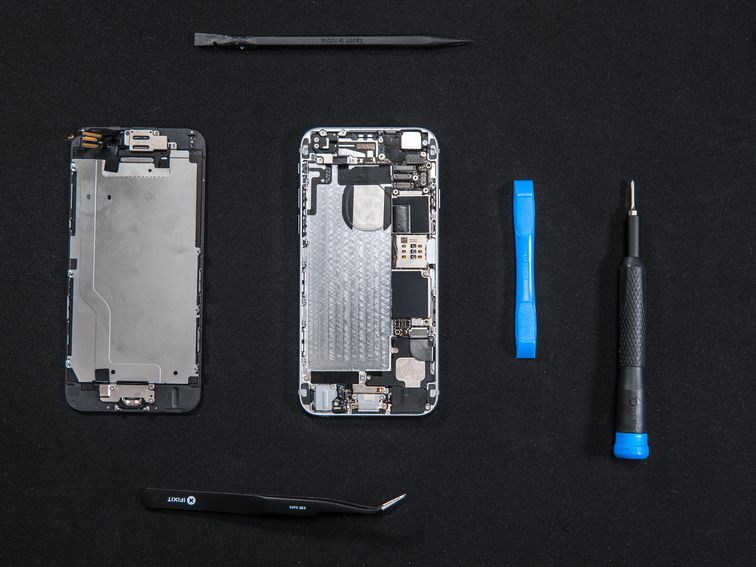 When I found an iPhone 6 ($197 at eBay) on eBay for only £75 ($95, AU$145), I was immensely pleased. But I was less pleased when I found out the battery had aged to the point where the software throttled its performance. But instead of casting off the phone and getting buyer’s remorse, I decided to buy a replacement battery and tools from iFixit to have a go at replacing the battery myself.

After an hour of work, I swapped out the battery and the iPhone 6 was running perfectly again. I’m not giving step-by-step instructions here — head to iFixit and grab a kit if that’s what you’re after — but I do want to give my experiences, including how easy it was to do, and hopefully answer some of the questions you may have if you also need a new battery.

Note that any maintenance you do on your own devices is done entirely at your own risk.

1. Why do you need to replace an iPhone battery?

Batteries age over time, and considering that the iPhone 6 was released six years ago, it was no surprise that the one I bought wasn’t running in prime condition. One time, the phone unexpectedly restarted while in use, and it flashed a warning dialogue that read, “This iPhone has experienced an unexpected shutdown because the battery was unable to deliver the necessary peak power. Performance management has been applied to help prevent this from happening again.” Even the phone itself knew it had a bum battery.

In short, a phone’s performance can be throttled if it can no longer cope with power demands. There is the option to turn throttling off, but this will result in more frequent crashes. Neither situation is ideal, so a battery replacement seemed like a smart way forward for me.

2. How much does a replacement iPhone battery cost?

The problem with my situation specifically was that I bought the phone for so little in the first place that spending more money on a battery replacement service negated some of those initial savings. Apple’s official replacement service costs £49 ($49), which is more than half the price of my iPhone 6 I bought. Being in the middle of the coronavirus lockdown also meant that getting to an Apple store isn’t really an option, and sending it in through the mail would bring the total cost to £56.44.

iFixit, however, sells a DIY replacement pack for £35 (including postage to my home in Scotland). It costs $30 in the US and with shipping costs that comes to $37.96. It’s not a huge saving over Apple’s official replacement, but every little bit helps.

3. What comes in the iFixit battery fix kit?

iFixit’s kit comes with a third-party replacement battery that is not from Apple, since Apple does not sell its parts separately. It also has all the tools needed to open the phone and remove the old battery. The only additional thing I needed was a hairdryer to heat up and remove the glue.

4. Does replacing a battery void your phone warranty?

Opening up an iPhone will void the warranty, but if your battery is aged to the point that it needs replacing, odds are you’re already out of the 12-month warranty period.

5. Is it safe to replace your iPhone battery yourself?

This one isn’t so straightforward to answer. iFixit’s guide gives very detailed instructions on the steps involved, but there were a couple of points that made me nervous. One step involved heating up the back of the phone with a hair dryer in order to loosen the glue holding the old battery in place.

Specifically, it noted that the heat be “slightly too warm to touch comfortably,” which I found a little vague. Especially since that section also warned that “overheating the iPhone may ignite the battery.” But how hot is too hot? What signs would I see if it’s overheating? I could not find this information, and as such wasn’t too sure how close to overheating I may have been.

Shortly after, while trying to pry out the old battery, I accidentally ripped into what looked like the black wrapping around that battery. I was pretty sure that the battery itself wasn’t punctured — there was no smoke or hissing — but I’d have felt a lot more comfortable if I had “emergency” instructions on hand about what to do if the battery did ignite.

6. Can I replace my iPhone battery myself?

Up to a point, yes, and I’m not normally “handy” in a DIY sense. iFixit’s instructions were easy to follow, and there were only seven internal screws to remove, which were easy to replace.

What I found a little confusing was that iFixit’s instructions on its web page end at the point where you remove the old battery. The only instruction in the conclusion was to follow the previous steps in reverse order. Admittedly, that wasn’t particularly difficult to do, but I would have appreciated more guidance at that point.

One issue I ran into independently from iFixit was that, during the removal of the screen, I cracked the screen protector that was in place. I noticed the hairline cracks and was worried that I’d damaged the display itself, but thankfully that was unharmed.

7. Is it worth replacing an iPhone battery?

It really depends on the age and value of your phone. If, like me, you bought a cheap used iPhone and just want to get it back up to speed, then it’s a great way to breathe new life into old tech without spending a fortune. Bear in mind, though, that this wasn’t going to be my main phone, nor did I buy it with my own money. For me, the risk was low and had I done it wrong and ruined the phone, it wouldn’t have been a big problem. You’ll need to consider whether you really can manage without it, just in case the worst happens.

If you’re using a more recent handset, like an iPhone X ($900 at Boost Mobile), for example, I’d probably just take it directly to Apple. The savings you’ll get from doing it yourself aren’t so great as to justify the potential cost of damaging a more valuable handset.