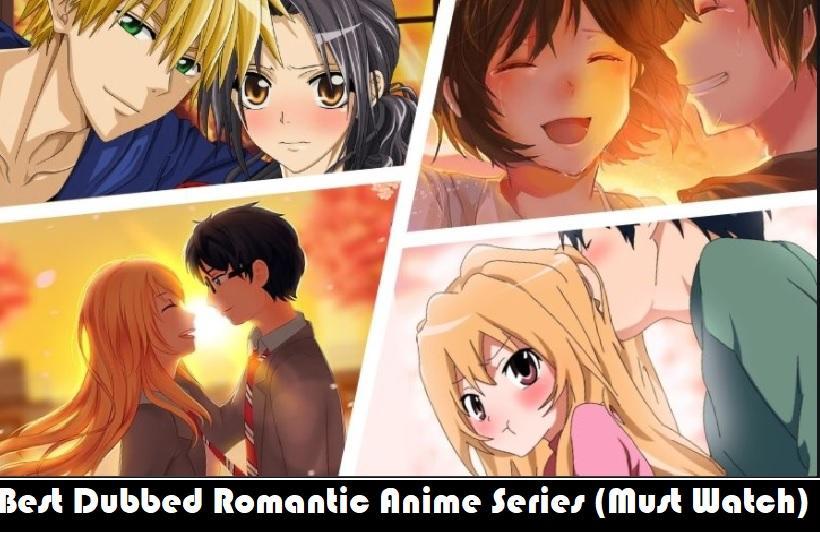 Many users believe that dubs don’t get enough love they deserve. Somehow this point is right as well from the audience’s point of view since it is nowadays very hard to find quality series. Here what you have to do is to get the characters’ voices just right to be able to convey their personality perfectly, otherwise, the story will not be as enjoyable.

As we know Love has no boundaries and comes in different forms. Some people love to taste this romance in form of TV shows and movies. While others love to watch romcoms. at the same time, there are many ones who just want to cry a lot while watching these. The best part is that you can get all this experience in animes.

So what are you waiting for? Go through this list of best Dubbed Romance Anime Series in English. But the list will not contain only animes in the English language but also in a variety of languages they are available. Now let’s have a look at some of the great romance anime that features some English voice acting.

A Silent Voice is definitely one of the best Dubbed Romance Anime Series. The best part here is the protagonist who is a deaf girl whose name is Shoko Nishimiya.  This role is played by a deaf actress Lexi Cowden. This was definitely a good move by the director as it gives the nine a more authentic and realistic feel. Not on;y this, another star cast is also great in dubbing.  The conviction by which the story has portrayed the emotions is really commendable.

5 Centimeters Per Second is one of the great dubbed romance anime. The most engaging part about this series is its amazing visuals that are completely heart-warming. the love story also keeps you hooked with it.  the whole story of this anime revolves around Takaki Toono and Akari Shinohara after they got separated. as these two friends always remain in contact via letters.
Here Takaki realizes that he will move away and will not be able to see Akari again. So he requests her to meet one last time. So the whole story revolves around how they lead their individual lives with the hope that someday they will meet and see each other again.

Both the subversion and the dub version of Your name are very much popular. Here the story revolves around two characters Mitsuha and Taki who are completely different characters and lead their own lives. Mitsuha is a girl who belongs to a rural area whereas Taki is a boy who lives in a bustling city.
When they start meeting each other, they get to know about each other’s lives and a romantic bond starts budding between them.  But the bond comes at stake when it is revealed that Mizuha is living in a different timeline from Taki – and in Mizuha’s timeline, a comet has struck her village. So the whole story is engaging. You can watch it for sure.

The Toradora is a wonderful Dubbed Romance Anime Series that revolves around the relationship between its two main characters. Both the characters seemed to help each other in getting their respective crushes. But as the story proceeds, somehow they got to fall in love with each other.  The story is simple but the execution makes sit an exceptional one. The voice-over makes it a great anime to watch.

If you don’t like love stores that male you cry a lot. then Nisekoi could be a great choice for you. As it is a lighthearted romantic comedy. Here the story revolves around two school students Raku and Chitoge. Their fathers are rivals of each other. Similarly in the start, Raku and Chitoge hate each other too.
Bit their fathers think that their rivalry should be put to peace, and for that their children must date. For this, Raku and Chitoge have to pretend to be boyfriend and girlfriend so all hell doesn’t break loose.

#6 Your Lie in April

Your Lie in April is a promising Dubbed Romance Anime Series. This is about Arima Kousei, who is a prodigal pianist and whose career got derailed due to a tragic incident. But soon, it came in contact with a violinist Kaori Miyazono, who is a free-spirit person.

You know what’s the best part about it – It is that – Your Lie in April doesn’t focus on the romance between Arima and Kaori. In fact, it majorly focuses on their complicated personal issues and uses that help to bring them closer in a way that feels natural and authentic.

Fruits Basket is a great Dubbed Romance Anime Series. Here the story is about a teenage girl who suddenly gets involved in the affairs of the mysterious Sohma family.  The Sohmas are basically impacted by a curse that use to transform into the animals of the Chinese Zodiac when embraced by a member of the opposite sex.

At initial, the story may seem to be a fun one but it is actually not. The whole story is a roller coaster ride of intense emotions and pain. Here Tohru attempts to heal the pain as much as he can do. The dub has done a fab job indeed.

#8 His and Her Circumstances

This beautifully carved dubbed romantic anime series is also known as Kare Kano.  Here the story is about two students who seem perfect but are actually a bundle of flaws. The main character Yukino Miyazawa calls herself a queen of vanity. On her journey, she meets model student Soichiro Arima. This model student gets so popular that whole attention which was initially at Yukino Miyazawa got shifted to Soichiro Arima. So she thought to bring her down by all hooks and crooks.

The garden of words is my personal favorite Dubbed Romance Anime Series. Here the story revolves around a student Takao Akizuki who wants to be a shoemaker. one day he decides to sketch his shoes in the garden by skipping his class at high school on a rainy day. Here meets Yukari Yukino. The girl seems very beautiful and cheerful to her. She shows up in the garden with chocolate and beer.

When she notices he is a student, she bids him farewell. Eventually, he offers to sketch her some shoes and so their adventure begins. This is how they started meeting each other. One day when he goes back to school, he came to know that the girl was not a student but a teacher. Now Yukari has to make the decision whether or not to leave the school and continue her career somewhere else. While Takao continues to struggle in school and does not want Yukari to leave. Now it will be interesting to figure out whether words are still left unsaid before it’s too late?

The ancient Magus’ Bride is a story of an orphan girl whose name is Chise Hatori.  Her magical potential helps her to earn a lot of attention from a mage named Elias Ainsworth. This is again a beautifully presented Dubbed Romance Anime Series. Elias teaches her magic tricks and in return learnt about human emotions. this story si quite different from what we have seen so far. this story shows comedy, action, romance, or drama, basically everything.

This is one of the most creative Dubbed Romance Anime Series whose voice-over artists create the magic of their voice and make it more successful. It is romantic comedy series that revolves around a gender non-conforming girl named Haruhi who accidentally breaks a vase and has to join a host club where she has to dress up like a boy so that she can pay her debt.  this is one of the most hilarious shows we have seen so far.

It is definitely not one of the perfect Dubbed Romance Anime Series. Here the story revolves around revenge the main character has to take from his childhood bullies. He drops a lot of weight and also improves his skills. His plan was to seduce her and dump her in the most humiliating fashion possible. But as soon as he gets to know more about her, he falls in love with her. Masamune’s interior dialog is hilarious, while Aki Adagaki’s haughty voice is perfectly depicted.

Wolf Children is definitely one of the most popular Dubbed Romance Anime Series. This is about a young woman whose name is Hana. she falls in love with a man who can transform into a wolf. they both get married and have children. Soon, the wolfman dies, and the whole responsibility of children comes on Hana. The movie doesn’t only show the romance budding between the characters but also enlightens the facts that how tough a human and animal life is.

Hey, found the post about “best Dubbed Romance Anime Series” informative, then share it maximum with your friends and family !!