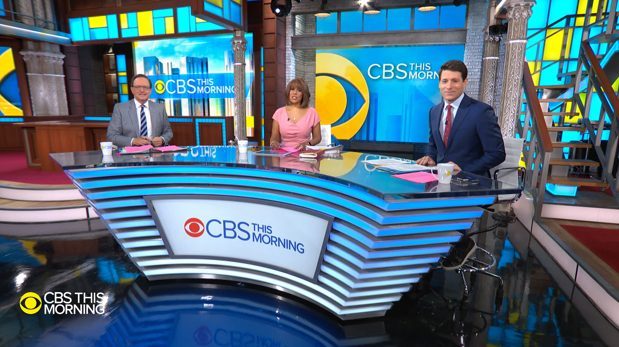 “CBS This Morning” co-anchor Anthony Mason has shifted to work-from-home mode as of Wednesday after a family member began to exhibit possible symptoms of coronavirus.

Viewers of the CBS News morning show tuned in Wednesday to see only anchors Gayle King and Tony Dokoupil at the desk.

Mason appeared from his Manhattan apartment, explaining to viewers that he was staying home out of an abundance of caution, a phrase that King noted has been much in use these days. He emphasized that he felt fine but wanted to adhere to state and federal guidelines to self-quarantine to avoid any possible spread of the virus that has up-ended life in the U.S. in a matter of weeks.

“I’m self-quarantining. I’ve had contact with a family member who has not tested positive but has one of the symptoms that could be coronavirus,” Mason wrote on Twitter.

King and Dokoupil complimented Mason on the decor of his apartment that was visible on camera. Mason at one point pretended to be a mime “trying to get out of this box.” When King commented on his digs, Mason joked: “Even a nice box gets old after a while.”

Mason joins “Good Morning America” anchor Robin Roberts on the list of major news personalities who are doing their jobs from home amid the national call for aggressive social distancing measures to slow the rate of coronavirus infection.

See also  Dekh Bhai Dekh Returns to Television: Urvashi Dholakia Recalls How the Cast Would Wait Patiently for Her to Finish School and Reach the Sets for Shooting