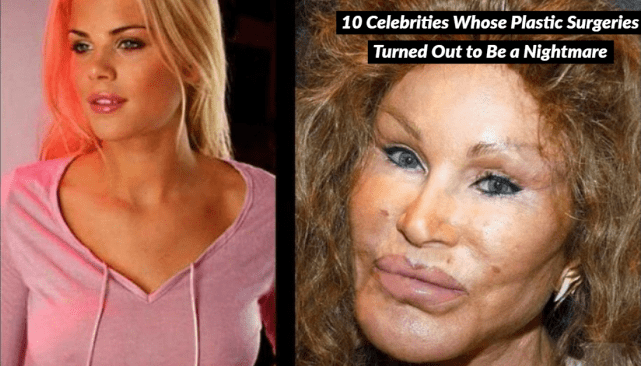 Celebrities are very open to their plastic surgeries. They are not ashamed of this. With competition rising daily, the divas have to maintain their position and status in the industry with their acting talents and, of course, beautiful faces and bodies. Sometimes plastic surgery doesn’t come the same way as we want; it becomes totally disaster for the celebrities, not only for them but for us also. But some celebrities go through this painful procedure, and the result came very pretty for them. So many celebrities have paid up to 1$ million for just puffy lips and stretched faces.

Everybody desires to look perfect, our actresses more so because they are often viewed as role models or as beauty symbols.  Plastic surgery is a surgical specialty involving the reconstruction or alteration of the human body.

Have a look at these 10 celebrities before and after the plastic surgery disaster.

Heidi Blair Pratt is an American reality television personality, singer, and actress. Born and raised in Crested Butte, Colorado. Last year, Montag revealed that the going through her surgery was a very scary time for the couple. She says her heart briefly stopped during her recovery. Heidi was very young when she decided to have plastic surgery, just 23.

She had undergone 10 body-altering procedures in one day, including a brow lift, a chin reduction, and Botox injections. she said, “I think I look way better, and I’m way happier,.” “Nobody ages perfectly, so I plan to keep using surgery to make me as perfect as I can be.

Heidi regrets a lot about her plastic surgery, she said everyone shows their after and before pictures on social media, but they never told you about the painful recovery stage. she is not against plastic surgery, but she said that it was also not a glorified so before doing it take your decision seriously. 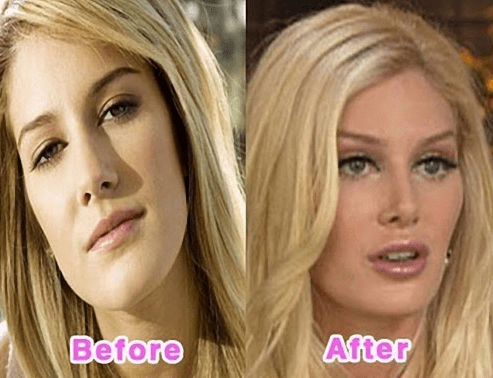 Katrina Amy Alexandra Alexis Price is an English media personality, model, and businesswoman. She gained recognition in the late 1990s for her glamour modeling work, billed under the pseudonym Jordan.

As the 43-year-old’s status has risen over the last two decades, so too has the number of cosmetic surgery she has undergone. Started with a boob job at the tender age of 18 to kick-start of her career; most recently, Katie Price revealed her last boob job came about as very ugly as compared to her previous sessions. Katie added: “His first words were: ‘What the f*** have they done?’ He had to correct them for me.” 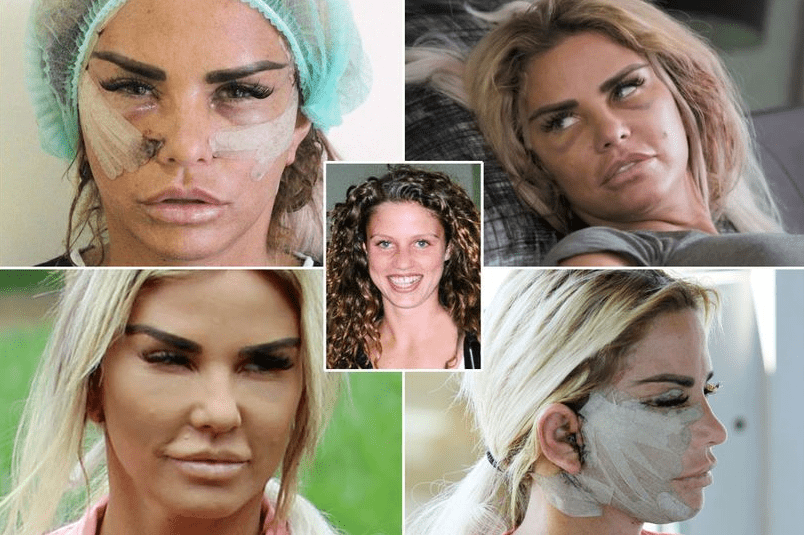 Philip Andre “Mickey” Rourke Jr. is an American actor and former boxer who has appeared primarily as a leading man in drama, action, and thriller films. Rourke won 27 matches, including 12 straight knockouts and 3 defeats between 1964 and 1973. His return to the ring as a professional boxer in the 1990s also proved to be equally successful.

Unfortunately, his boxing career also came with so many severe facial injuries. Rourke reportedly faced a broken nose twice and suffered toe and rib injuries. Rourke also had to undergo several reconstructive surgeries to treat his boxing injuries. However, many of those surgeries failed to bring the actor the desired result and prompted him to go under the surgery consistently. 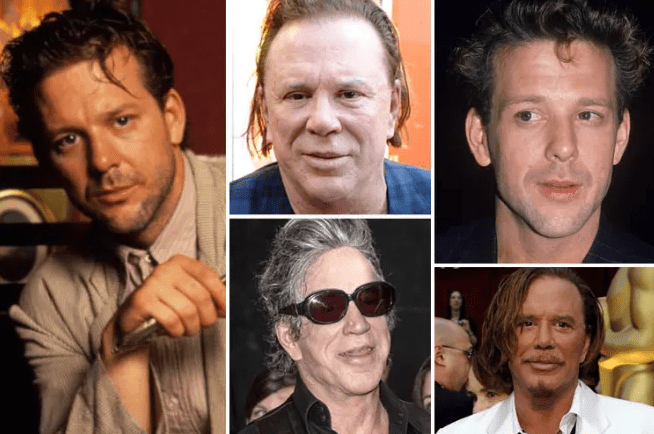 Carla Bruni-Sarkozy is an Italian-French singer and fashion model. In 2008, she married Nicolas Sarkozy, then president of France. Bruni was born in Italy and moved to France at seven. She was a model from 1987 to 1997 before taking up a career in music.

Plastic surgery disasters in the entertainment world are not rare. And unfortunately, the Italian beautiful singer Carla Bruni’s case is one of the plastic surgery disasters. Carla Bruni used to be a charming and fabulous singer but now she is strange. Many suggested that too much Botox and other surgical procedures had transformed her fresh good looks into something a lot stranger. 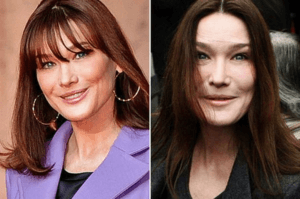 Shauna Sand is an American actress and Playboy magazine’s Playmate of the Month for May 1996. Shauna Sand has gone under the knife and had plastic surgeries multiple times. She had different surgeries done on her face as well as her body which included breast and lip job. She alerted her body and face very shockingly. Look at the picture below. You can easily see the difference between the past and present. 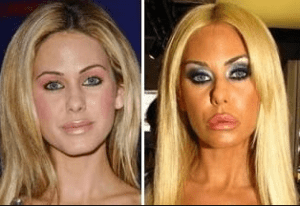 Anushka Sharma is a very talented actress of Bollywood. She recently married famous cricketer Virat Kohli. I wondered why she went for plastic surgery on her lip. Might she was under pressure to make a good career, that’s why she took this big step, but this decision became a big disaster for her. She was perfectly charming the way she was, but then suddenly, the whole crowd is focused not on her sparkling eyes but on her bee-stung lips.

She first makes her appearance on the show coffee with Karan, where she shows her puffy lips, and people start making joke about her through various posts and memes. 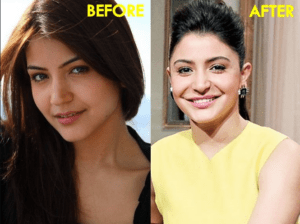 Nicole Avery Cox is an American actress known primarily for her roles on the television series Unhappily Ever After, Las Vegas. Actress Nikki Cox was one of the hottest stars on TV in the late 1990s and early 2000s. She appears to have gotten some filler in her cheeks and lips. Many stars certainly get fillers; Cox might have just overdone it.

Commonly, celebrities like to undergo plastic surgeries and modify their appearance. Hence, Nikki Cox’s plastic surgery has drastically affected her appearance. It is definitely due to the excessive use of surgical treatments.  Her changed features are so significant that an untrained eye can easily spot the differences.

Nikki Cox’s plastic surgery has not only changed her lips’ shape but also affected on her face. Her upper lips are wider in appearance, it doesn’t suit her personality. Her breast is not only bigger in size but also look as if something has pushed them up. 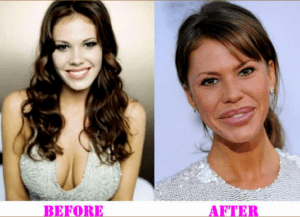 Kenneth Ray Rogers was an American singer, songwriter, and actor. He was inducted into the Country Music Hall of Fame in 2013. Kenny Rogers has undergone numerous cosmetic surgical procedures over the years. In 2006, he spoke publicly about his dissatisfaction with his cosmetic eye surgery results when it became obvious to the world that something had gone wrong.

If you look at pictures of younger Kenny Rogers, you’ll notice that his eyes were very masculine, with low eyebrows and little space between the upper eyelid and eyebrow. His unfortunate facial plastic surgery failure reveals high eyebrows, excessive space between the upper eyelids and eyebrows, and a hollow space above his eyes. What is the result? Eyes like an Alien. 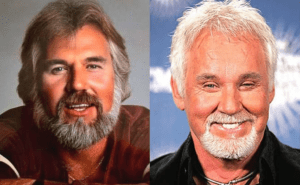 Peter Jozzeppi Burns was an English singer, songwriter, and television personality. In 1979, he founded the band Nightmares in Wax; in 1980. Burns has always been open about his fascination with cosmetic surgery, having had extensive injections in his lips, cheek implants, nose jobs, and tattoos. But his obsession with going under the knife had drastic consequences.

Burns revealed he had spent most of his life savings on 18 painful months of reconstructive surgery after a cosmetic procedure on his lips went wrong. The permanent filler injected into his lips began migrating all over his face and became infected, leaving his lips at risk of amputation. 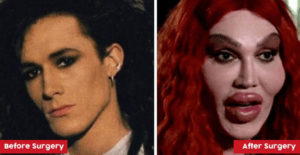 Michael Joseph Jackson was an American singer, songwriter, dancer, and philanthropist. Dubbed the “King of Pop”. Throughout his career, his dramatic transformation made him infamous as fans wondered exactly how much surgery he had and why his skin had become white.

For his fair complexion, Michael told back in the early ’90s that he suffered from vitiligo, a skin condition that created pale scars on his body. He said he had no plastic surgery on his face, just his nose. “It helped me breathe better so I could hit higher notes. I am telling you the honest truth; I didn’t do anything to my face.”

However, Michael wasn’t satisfied with his first nose job and got it done a second time to correct it. In the 90s Michael’s nose got noticeably thinner, and his skin got whiter. After so many nose procedures, Michael’s nose started to cave in. 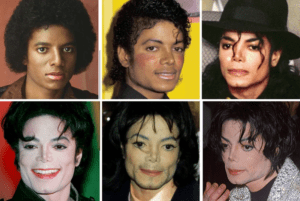 Usually, a makeover is a good thing; a new look often makes a person feel more confident, attractive or just reinvented. However, makeovers can make some people unrecognizable, which can make a problem, especially in Hollywood, where a big part of a celebrity’s relevance.

So many celebrities look a whole lot different after a makeover. Whether you consider the new look subjectively worse or superficially better, one thing is clear: These stars lost some of the characters that made them unique, thereby affecting the perception of audiences and agents alike. So before plastic surgery, think twice and go under the knife.