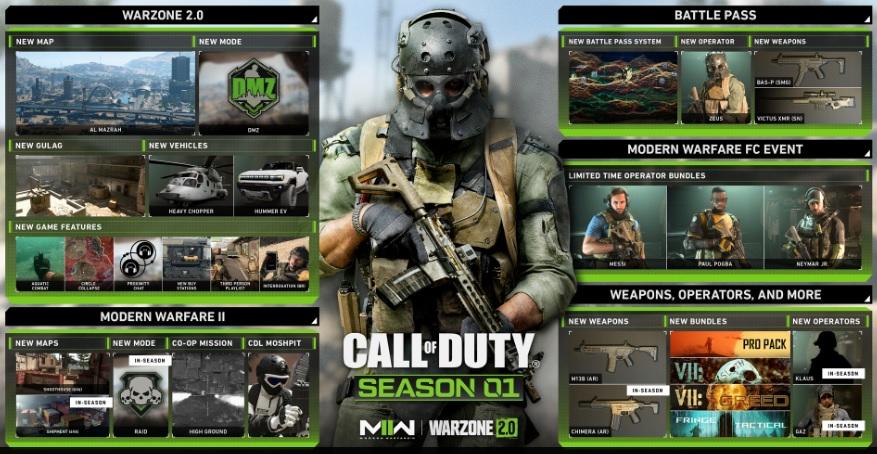 Call of Duty is a Wonderful game that has millions of players all around the world. The launch of Season 1 of Modern Warfare 2 and Warzone 2.0 is just around the corner. However, the players are excited to know all the details about the upcoming titles.

A week before Call of Duty titles were released, Activision dropped a massive intel post on the official Call of Duty blog regarding Warzone 2.0 and Modern Warfare 2 Season 1 content.

Season 01 launches on PlayStation on November 16. Read on for all the highlights of Modern Warfare II and Call of Duty: Warzone 2.0.

A new Map Al-Mazrah is arriving at Warzone 2.0

It is the new battleground of the battle royale game. It is centered around the Modern Warfare 2 narrative and is a city within the United Republic of Adal. This map has around 15 significant points of interest (POI) and other smaller POIs scattered throughout. Al -Mazrah is one of the biggest maps players will love exploring.

The maps mentioned below are also major POIs in the new map of Warzone 2.0.

Warzone Players know the importance of Loadouts in gaming. In the upcoming title, players will be able to earn their loadouts in the following three ways:

See also  iOS 14.5: How to unlock your iPhone with an Apple Watch?

Players were not happy with the latest Looting Mechanism and they complained about it to the Community. The Developer listened to the people’s request and reverted the looting mechanics of the battle royale mode to the traditional one.  In BR mode, supply crates will throw out items for pickup, whereas other loot holders like containers, duffle bags, and medical cases will have a new loot menu.

The game brings a new backpack System. Players must store their loot according to the inventory slots available in their backpacks.

The brand new title brings a new Gulag System. The new Gulag of Warzone 2.0 will feature four players. Two teams of two players can duke it out for the freedom of just two, or they can team up and defeat the AI combatant Jailor during overtime for the freedom of all four.

The battle royale mode will feature a new circle collapse mechanism. Instead of one big circle that will get smaller as time passes, there can be up to three separate circle collapses that will merge at the end of the match

Players will now have the option to team up with enemy operators and form larger squads to complete the objectives.

Warzone 2.0 brings many new as well as old vehicles to the game. Here is a list of all the vehicles that the operators can use to traverse the air, ground, and water of Al-Mazrah:

This time, the players will not have an infinite fuel tank. Players will have a fixed fuel tank that needs to refill from the Gas Station if they want. Players can even repair the busted tires of the vehicle anywhere on the map by interacting with them individually.

Modern Warfare 2 Season 1: What to Expect?

Modern Warfare 2 Season 1 is also going to launch on November 16. Warfare 2 will see the return of the fan-favorite Shoot House and Shipment maps. Right at launch, a new mission is also being added to the Spec Ops Mode. Season 1 will bring four new weapons, Victus XMR sniper, BAS-P SMG, Chimera, and M13B assault rifles, to the game.

In addition to weapons, Modern Warfare 2 will also see the arrival of six new operators. Three of them, Gaz, Klaus, and Zeus, come from the title’s lore, and the other three depict famous footballers Messi, Neymar Jr., and Pogba.