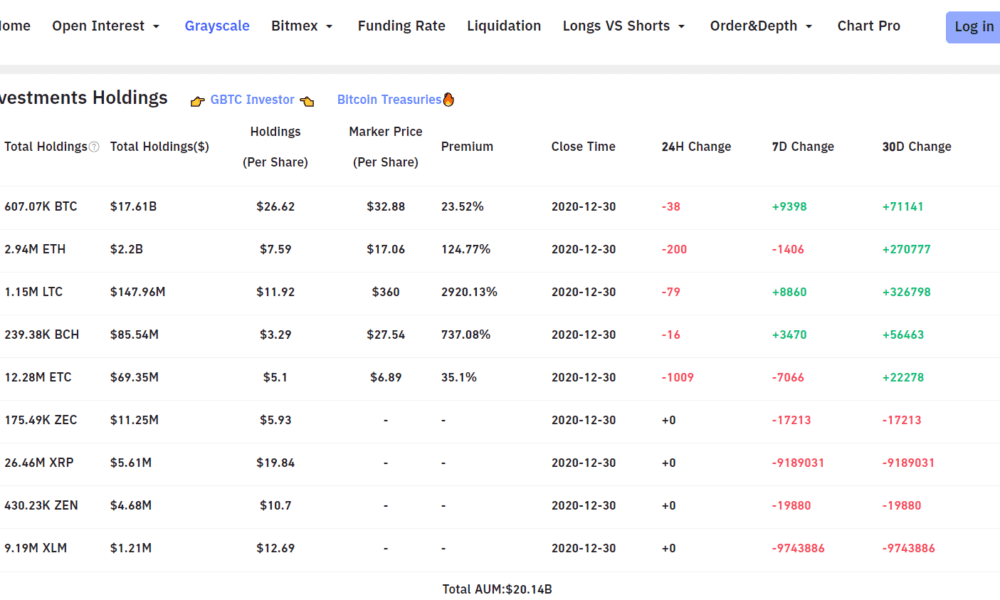 Grayscale’s crypto trust stock attracted record investments in the first quarter of 2020, despite the financial crisis and the fall in crypto markets in March. The main clients of Grayscale are institutional investors. Why are they not ready to buy cryptocurrencies directly and, at the same time, have recently shown more interest in ether than in bitcoin – we understand the material.

On April 16, the American investment company Grayscale published its financial report on its cryptocurrency trusts for the first quarter of this year. For the first time in the company’s history, over $ 500 million was invested in trusts in three months. And this despite the global Coronacrisis and the sharp drop in the crypto market on March 12-13.

The previous record for investments happened in the third quarter of last year – then Grayscale managed to raise $ 255 million.For comparison, in the first quarter this figure was $ 42.7 million, in the second – $ 85 million, and in the fourth – $ 225.5 million.

Each Grayscale Trust is a regulated fund made up of one underlying crypto asset. The fund is divided into shares that are traded on the OTC market. Each share is based on a portion of the underlying asset from the fund. For example, the Grayscale bitcoin trust share is backed by a reserve of 0.0001 BTC.

Who is willing to overpay for Grayscale funds and why

The main buyers of Grayscale Trusts are US institutional investors. Therefore, trust shares are fully regulated assets that are traded on sites familiar to whales. To avoid legal and tax risks, as well as the need to be responsible for the storage of cryptocurrency, institutions buy derivatives based on them. According to the company’s latest report, institutional (mainly hedge funds) already occupy 88% of the buyers of Grayscale trusts.

Bitcoin Trust is the oldest and most popular Grayscale fund, but the company is gradually expanding its product line. In addition to GBTC, the organization now offers eight more trusts, each with its own underlying crypto asset. In addition, last fall, Grayscale received approval from the Financial Services Regulatory Authority (FINRA), which regulates the OTC market, to launch the first trust tracking the value of a basket of top cryptocurrencies by capitalization. As of April 20, it was trading at a premium to the base price of 40%.

Share of investors who have invested in multiple Grayscale funds. A source.

ETHE is the second most popular Ethereum-based fund after GBTC, and the demand for it is constantly growing. In the second half of March, ETHE even surpassed the bitcoin trust in terms of investments, showing a cash flow of $ 110 million versus $ 389 million from GBTC. According to Spencer Noon, head of DTC Capital’s cryptocurrency investment department, this is more than 2 years combined.

If you look at the structure of investments in Grayscale products, it becomes clear that the main investments in GBTC were in January, and then the whales’ appetite for the ETH fund sharply increased:

Grayscale itself does not answer the question of why the popularity of the ETH trust is growing among its clients, but a possible reason was pointed out by Messari analyst Ryan Watkins. By mid-April, ether had reached an important psychological milestone: for the first time. The daily transaction value on the Ethereum network reached parity with the Bitcoin network (about $ 1.5 billion). You can use dgb to etn converter. Exactly a year ago, for Ethereum, this figure was five times lower.

See also  Why gambling should also be allowed in the USA: an analysis of Europe

Dynamics of the total adjusted transaction value in the Ethereum and Bitcoin networks.

Watkins himself attributed this to the record growth in the capitalization of ETH-based stablecoins due to the DeFi revolution. According to Messari, today stablecoins account for 80% of the daily transaction value in Ethereum.