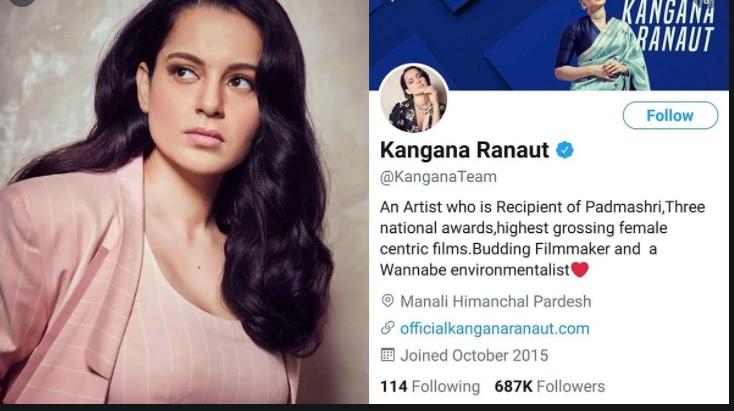 Actor Kangana Ranaut’s Twitter account has been suspended permanently for repeatedly violating the platform’s rules. The move came after the actor commented on the alleged violence in West Bengal following the assembly election results.

Kangana said that no violence was reported from Assam and Puducherry where BJP won, but ‘hundreds of murders and #Bengalisburning’ after TMC won in Bengal. The actress also commented on Jawaharlal Nehru and Indira Gandhi in her tweets.

The 34-year-old actor’s handle @KanganaTeam now displays the message: account suspended.  Calling for President’s Rule in the state, she also blamed Banerjee for the violence and demand strict action against them.

She had close to three million followers on Twitter but the same stands inactive as of now. This is not the first time Twitter has taken action against the actor’s account. Earlier, the micro-blogging site had removed a number of tweets made from her account for violating the platform’s policies.

“We have been clear that we will take strong enforcement action on behavior that has the potential to lead to offline harm. We enforce the Twitter Rules judiciously and impartially for everyone on our service,” the spokesperson added.

Earlier this year, certain restrictions were imposed on her account after she posted an incendiary tweet against Amazon Prime Video.

“Twitter has only proved my point they’re Americans and by birth, a white person feels entitled to enslave a brown person, they want to tell you what to think, speak or do. I have many platforms I can use to raise my voice, including my own art in the form of cinema.”

Kangana Ranaut has been tweeting controversial posts since the time she took over her account in 2020. From calling out on nepotism, farmer protests to people asking for oxygen due to the COVID-19 crisis, she left no stone unturned in criticizing people.