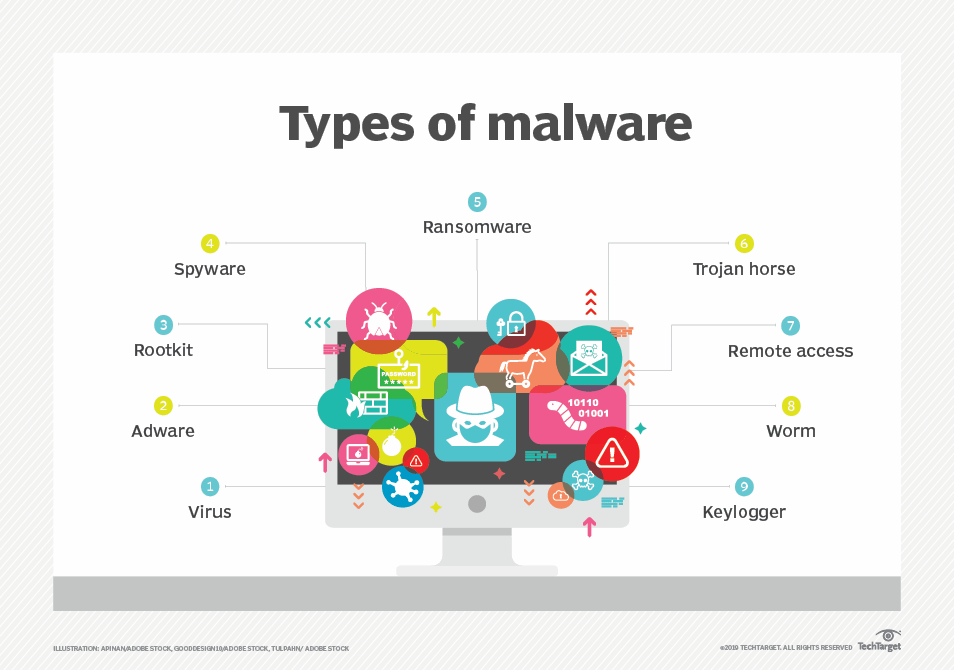 Malware is a comprehensive term used for any kind of harmful software regardless of its intent. The main types of malware include viruses, trojans, ransomware, bots, spyware, etc.

IT professionals use many techniques to mitigate the risks caused by malware. These approaches include the implementation of security measures like multifactor authentication and a malware removal tool. As a general user, you can also apply these measures to prevent malware attacks on your software systems.

You should know that no system is 100% secure and ‘hack-proof’. You have to be ready to launch an anti-attack to prevent them from harming your system. Below are some of the most common types of malware and how can you restrict and prevent them:

The most common type of malware users often experience is viruses. Some people confuse viruses with malware, so let us make things clear for you. Malware is a comprehensive term describing all possible system threats while a virus is one of the types of malware.

Viruses attack the system when a user clicks or copies a harmful file in the system. Once viruses are inside the system, they start to replicate themselves without the knowledge of the user. Most often, they spread via downloads, email, and removable media devices.

Trojans are malicious software programs that disguise themselves as legitimate software and files. Hackers use it to infiltrate computer devices. Trojans can be found in document files like .docs and PDFs, or they can also be in the form of computer-executable files.

Once you open the attacked files or activate the executables, trojans start to spy on your system and start to collect sensitive information. Like viruses, they also spread via email attachments and downloads. However, unlike viruses, trojans cannot be self-replicated.

Just like viruses, worms are seen to replicate themselves once they enter your system. However, they don’t require a host and are spread over the internet and computer networks. Mostly, worms spread through network connections, instant messaging, and emails.

The main targets of worms include email servers, database servers, and web servers. As they don’t require their activation from the human side, they are considered standalone malware.

As evident from the name, keyloggers are a type of malware that infiltrates a user’s keyboard. Once entered the system, they start to log a user’s keystrokes and continuously send data to the third-party threat actor.

You may know it or not, but keyloggers are also used by certain employers to track the activity of their employees. However, they can also be used to steal passwords and sensitive information by processing one’s keystrokes.

In such cases, users are generally unaware that their activity is being monitored by a third-party actor.

A botnet is actually a short form of robot network. They are also simply termed as bots. Bots are any compromised computer system that is attached to a network with compromised security. These computer systems are infected with malware and are used as a weapon to launch attacks against certain individuals or organizations.

Botnets are generally controlled remotely by a threat actor. One of the most harmful bots was Mirai, which was used to gain control of your IoT-connected devices like printers and LCDs back in 2016. It was also responsible for taking down multiple websites during that year.

Ransomware, as the name implies, is a type of malware that is used to lock a user out of its system until some demand is met. Ransomware encrypts a user’s data and typically shows a message on the system screen about the payment of ransom.

Ransomware denies a user access to data by first capturing and sending the data to the threat actor. It then deletes the backup of their data and uses encryption protocols to encrypt that data. The threat actor then provides proof of data and demands a ransom, threatening that information will be made public if payment is not made.

The most common type of ransomware is crypto malware. The threat actor typically requires payment via a cryptocurrency like Bitcoin, Ethereum, etc.

You might have noticed those unwanted pop-ups on your browser screen that state to download a program. They might also tell you that your system is at risk or you may need to update a certain program to continue further.

You can consider rootkit as a backdoor program that gains remote admin access to your system. After gaining access, the threat actor commands and controls the computer system without the user’s knowledge.

The controller then starts to spy on the user’s data, executes certain files, and changes system settings remotely. The rootkits are usually deployed using viruses, worms, and trojans. They can then modify the system files and prevent anti-malware programs from detecting them.

Logic bombs are a type of malware that is triggered to attack after a certain logic is achieved. For example, after a certain number of particular actions or on a specific date/time. They remain in the system for weeks or even months in some cases.

Logic bombs often come with viruses and worms, and behave in a specific matter until a specific date or time. This means a logic bomb remains unnoticed until it starts to execute. It causes damage to the systems including deleting the files or making them unreadable by the user.

How to Prevent Malware Attacks?

As mentioned earlier, no system is 100% secure and it is almost impossible to be completely protected from cyber-attacks. However, there are certain measures you can take to prevent these from harming your systems: