Online Games have one of the biggest markets in the world. PlayStation 2 is the best-selling Gaming Console of all time. Today, people of all ages love to play games to relax. According to one report, global spending on video games exceeds that on Cinema boxes. Max Payne is one of the most excellent games released for the PC in 2001. Later, the developers ported the game to the PS2 and Xbox in December in the US.

The game receives an overwhelming response from the audience. Fond of Shooting games? What are Max Payne PS2 reviews? In this post, we will share everything about Max Payne PS2. So keep reading.

The fourth edition of Max Payne is the hot potato of the gaming market. If you are also waiting for the Max Payne 4, check out our release date prediction for the game.

Max Payne is a revenge-driven action game that was developed by Remedy Entertainment and produced by 3D Realms. It is an original third-person 3D game that is set in New York’s grimy Underground. The game is all about a man named Max that is hunted by cops and mobs. He is fighting a battle that he has no hope of winning. Lots of Photorealistic Visuals and breathtaking effects make the game more engaging.

See also  No Man’s Sky has mech suits now, and you can pilot them in VR

The game revolves around a Police detective Max whose wife and a few drug addicts kill children. Max killed all the murderers and decided to take revenge by breaking down the drug cartel. Later in the game, he discovers that his Wife is not a victim, but her murder has been a part of a Conspiracy. As the game progressed, he found that not only gangsters but many police officers were involved in the murder. Later, he was hunted by criminals and some of his former Colleagues.

Max Payne is a third-person Shooting game that is better known for its cool graphics. This game is all about using your bullet time meter to leap sideways or backward, firing your handguns, and machine guns in slow motion. The most attractive part of the game is special kill angles, like swirling around a falling body or following the bullet as it travels to the enemy. Besides the bullet time meter, the game also provides Health and Ammo meters.

More details about the game:

About Sounds, and Graphics

The graphics of the Max Payne 2 for PS2 are Stunning. The graphics are not that up to mark but they are even better than GTA 3. The developers have worked very well on the sound. The sound of guns, explosions, and sound effects are still top-notch.

Max Payne serves nonstop action that is served by lots of violence. So the game is definitely not for those who want to keep their hands clean. The game arrives with a spectacular Bullet Time feature, which allows Max to dodge bullets in slow motion a la Neo in The Matrix!

The game arrives with many cool weapons that steal the heart of the players. There are Berettas, Desert Eagles, Colts, and a sniper rifle. Sniper rifles can be used to shoot the enemy from a long distance. When you shoot through this rifle, you will see slow-motion tracking of the path by the bullet to reach the target, which is very interesting to watch.

No one can deny that Max Payne has an intriguing storyline far, far better than some first-person Shooter games. However, the game is all about violence and killing and contains lots of sexual content. There are many drastic scenes, such as blood everywhere, burning dead bodies, explosives, and more. All this content makes this game for adults only. The game is all about shooting. Max Payne is the best choice for those who love to play battle Royale games. 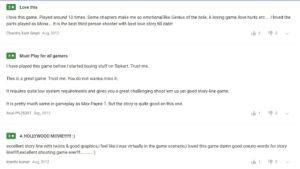 WHAT DO PARENTS SAY?

WHAT DO KIDS SAY?

The main ingredient behind Max Payne’s success is the fictional gameplay. Playing the game continuously for 2 hours will give you the experience of watching any Action thriller movie. The beautiful graphics, stunning effects, and decent storyline make this game even more popular. The way Max killed all the people coming on his way makes the Critics love this game.

That’s all about Max Payne PS2 Reviews. The game received mixed reviews from the Critics, as well as the users. Overall, playing Max Payne on PS2 will give you a spectacular experience. The game also wins many awards for its good gameplay and Storyline. Haven’t played Max Payne yet? We recommend you give it a try.