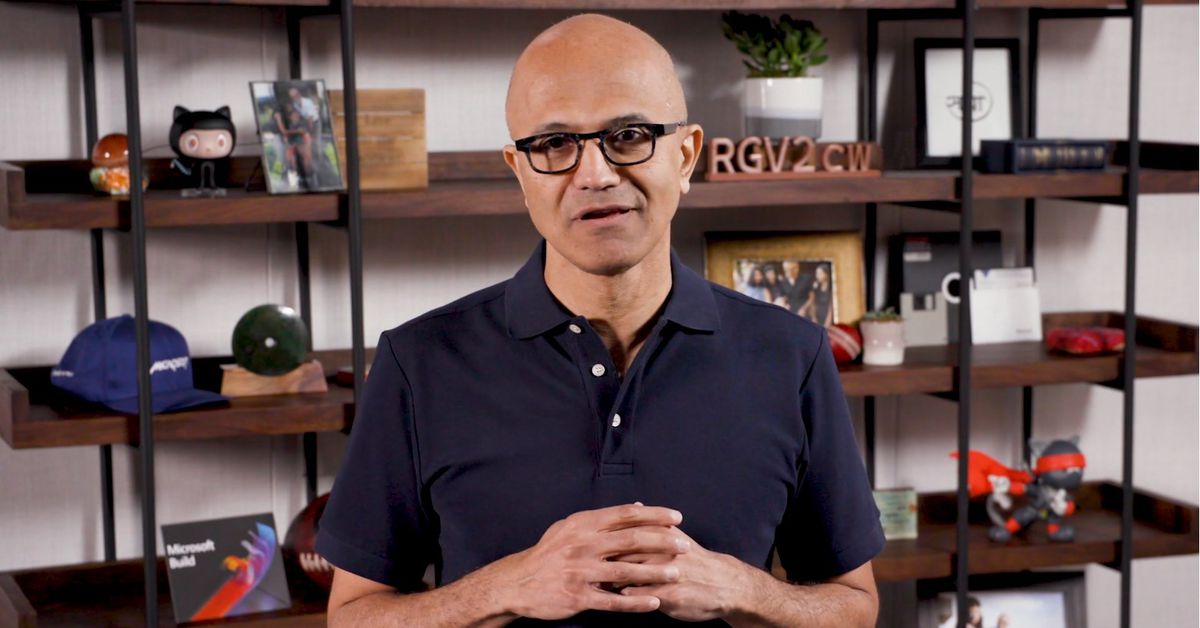 If you tuned into Microsoft’s Build developer keynote yesterday, one of the things you may have seen was a mysterious “RGV2cw” 3D-printed object on the shelf behind CEO Satya Nadella. It was part of many Easter eggs hidden throughout Microsoft’s Build stream, spelling out “devs” in Base64 format.

The shelf also had little Easter eggs hidden away, including an 8-inch floppy disc, an original Microsoft cap, the GitHub Octocat mascot, and even a Gold Master CD-ROM that Microsoft used to use for shipping final software to PC makers.

As Build moved on from Nadella’s opening remarks to Scott Hanselman, a partner program manager at Microsoft, the Easter eggs ramped up. With most of Microsoft’s employees working from home and streaming from their living rooms, Hanselman created an hour-long TV show that was delightfully nerdy.

Hanselman’s Windows theme changed the color of the lights in his room, even switching to red when he set his Microsoft Teams status to busy. It was all powered by PresenceLight, an app that syncs the accent color from a Windows theme to Philips Hue lights. “We actually wrote a custom app to do that to listen to the backgrounds changing,” explains Hanselman in an interview with The Verge.

Even Hanselman’s desktop included an Easter egg, revealing that Microsoft’s Edge browser is coming to Linux soon. Elsewhere, an Amiga bouncing ball appeared on one of the screens. The Amiga Boing Ball demo was created for CES in 1984, demonstrating how custom chips could fake an effect without using CPU power. It wow’d people just as Amiga was getting ready to launch its Commodore personal computer, ushering in an era of classic video games like Worms and Lemmings.

If the Amiga reference and Base64 encoding wasn’t nerdy enough, an ASCII dashboard showing off Azure data centers even appeared as a Microsoft Teams background. Microsoft employees also appeared in color-coordinated polo shirts, with the company’s green, red, blue, and yellow logo colors all on display.

See also  How Microsoft tackles the 30,000 bugs its 47,000 developers generate each month

All of these fun Easter eggs really underlined a different Build conference this year. The pandemic made it impossible to host Build in Seattle, but Microsoft put on a remote show instead. While recent Build conferences have felt like Azure sales pitches, Nadella comfortably displayed his technical knowhow by whittling off the tools and platforms that matter to developers instead. It really brought Build back to its developer roots.

“We had scripts and storyboards. We put it on like it was an hour of television,” says Hanselman. The nerdy feel and intimacy took weeks of planning, and the film Searching and a Modern Family episode — both shot entirely on PCs and phones — inspired the Build keynote heavily.

“We really feel strongly about our developer community … a lot of us do this because we love it,” says Hanselman. “We also thought about this medium … I’m in your ear, and we thought this out. We didn’t just pull Build out of our butts.”

The typical stage and hype were removed, and it felt like dialing into a Microsoft Teams call that moved from one house to the next. Microsoft put a big focus on developers this year, with software and updates to really back that up.

Build usually has 20 percent of its attendees from around the world, with the other 80 percent flying into Seattle from other US locations. This year, 65 percent are from the rest of the world, so inclusion is key. That’s reflected in a variety of languages supported in closed captions in the Build streams and even American Sign Language support.

And 95 percent of the presenters are remote, meaning several hundred people are delivering Build sessions from their bedrooms, home offices, and kitchens. “We were taking some pretty significant technology risks,” reveals Bob Bejan, Microsoft’s head of global events. Microsoft had to quickly work with its engineering teams to create a fully remote Build event. “It’s risky because we’re putting it into production immediately with large numbers of attendees.” The rapid work has meant two years of natural evolution for Microsoft events has been compressed into eight weeks, according to Bejan.

It’s clear Microsoft and Hanselman had fun putting together Build this year under the difficult circumstances of this pandemic. At one point, Microsoft Windows and devices chief Panos Panay appeared on the stream to talk to Hanselman. Panay is always pumped about everything, and Hanselman brought up a notepad during his chat with Panay and typed out “I feel like this might take a while” before jokingly fading him out with a Windows XP shutdown sound.

The majority of presenters seem to be having fun streaming live from their homes, too, providing question and answer sessions, training, and more. Hanselman admits he was worried it wasn’t going to work out, though. “Let me tell you, I was scared out of my mind it wasn’t going to land,” he says, but that “being fancy and blinged-out with a studio isn’t inclusive. Being a human is.”

There are more Easter eggs that will appear today and tomorrow as Microsoft brings its 48-hour marathon to an end. Hanselman put them in because developers have a keen eye for spotting things and solving problems — or, as he puts it: “Freaking nerds love this stuff.”