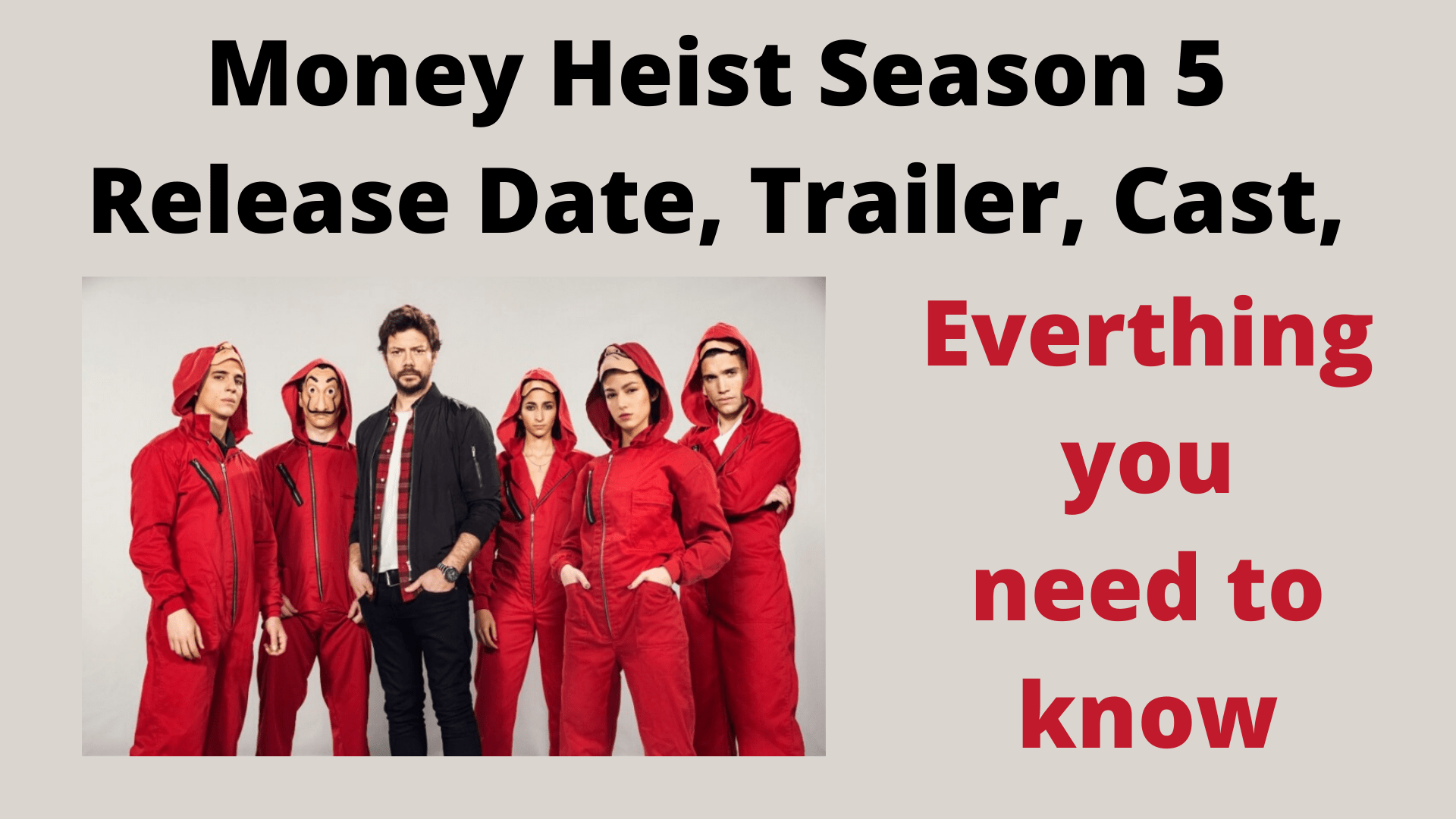 Money Heist is notably a very popular Spanish Heist Crime Drama. The 4 seasons have received a pretty good rating. Now, People around the world are now eagerly waiting for Money Heist Season 5. Will Money Heist Season 5 will come on Netflix soon? What’s the release date? Is there any twist in the story? To know the answers to all the questions related to Money Heist season 5, read the article below.

After watching season 4, people went crazy and it becomes the most anticipated TV series. Money Heist Season 4 has ramped up the action and added extensive bloodshed. The end of the previous season has left a curiosity in viewers about what’s next? There was a nine-month gap between season 3 and season 4 and thus season 5 is expected to arrive by December 2020. Due to the pandemic around the world, season 5 might be delayed by a few more months.

Money Heist was created by Álex Pina but when it was released in Spanish only, it went flop and gained no popularity. But now the serial becomes the most wanted series worldwide. The Show is based on two long-prepared heists directed by the Professor in the Royal Mint of Spain, and one on the Bank of Spain. Initially, the series had its original run of 15 episodes on Spanish network Antena 3 from May 2017 to November 2017.  Later, by the end of 2017, Netflix acquired the series. It did some changes in episodes duration and cut 15 episodes into 22 short episodes. Then Netflix started to release it worldwide, Starting from Dec 2017 followed by the second part on 6 April 2018. Netflix renewed the series and released season 2 with 16 episodes. In July 2019, Netflix released its season 3 with 8 episodes. After then just now in April 2020, Netflix released its fourth season in Part 4.

Season 1 begins with storytelling by Tokyo who lost her boyfriend in a heist and saved by Professor, who hires her and 7 others to loot the Royal Mint of Spain in Madrid. The eight robbers Tokyo, Moscow, Denver, Nairobi, Rio, Helsinki, Oslo, and Berlin guided by the Professor dressed in red jumpsuits and mask of Salvor Dali takes 67 hostages. The season shows the internal struggles of the robbers as they desperately try to stick to the plan as they had rehearsed for various months. Outside the Professor, while coordinating the attack at Royal Mint, starts to woo the Inspector in charge Raquel Murillo.

Season 2 is a like a part of Season 1, it starts off where the season 1 ends, with Professor in the house of the Inspector. While the eight robbers face a steep task of digging a tunnel, printing money while avoiding conflicts with the National Corps. As the search for Professor continues, the robbers’ nerves reach a breaking out.  With the hostages planning an escape, the robbers lose Oslo and Moscow to injuries. It ends with a final showdown between the remaining robbers and the National Corps as the robbers escape with 984 million euros but without Moscow, Oslo, and Berlin.

It begins with a timeline of 2-3 years after the heist of the Royal Mint of Spain. The robbers are enjoying their money at different places on the globe and living a secluded life till the time Rio gets captured by Europol.  To save Rio, Professor uses an old plan hatched by Berlin for looting Bank of Spain.  To do so he assembles the old crew along with Inspector Raquel (Lisbon), Denver’s love interest Monica (Stockholm) and Bogotá, Palermo, and Marseille.

As the robbers enter the bank and take hostages, the Inspector Incharge Alicia Sierra and Colonel Luis Tamayo are forced to hand over Rio to the robbers. The release of Rio turns bittersweet as Alicia while handing over Rio critically injures Nairobi. The police trap Professor in believing that the Lisbon has been captured and shot, while the season ends with Lisbon as alive.

Season 4 starts with Professor running hereto in an agony of losing Lisbon and the crew trying to save Nairobi’s life. As Tokyo does coup d’etat to take command from Palermo, Palermo colludes with Gandia, the chief of security for the bank to take his command back. In the bid to do so, he lets Gandia escape which leads to further confusion for the robbers and ultimately the death of Nairobi. In the meantime, Professor helps Lisbon escape the Police custody with the help of Colonel’s Assistant.

The professor exposes the unlawful torture of Rio and the holding of Lisbon shaming the Police. To save face, the police fires Sierra from the position, who begins the independent search of Professor. The season ends with Sierra finally finding the hideout of Professor and holding a gun on his head.

In season 4, significant gang member Nairobi died. Will he make a comeback?

YES, according to us, he will make a come back because his death shown in season 4 is not rigid and confirmed.

What could be expected in Season 5?

The Show owners chose to leave Season 4 in hanging cliff and fans were shocked that one more fan-favorite character is on the verge of death. Simply when the gang was released that the heist was on their control, the inspector of the National Police Corps sniffed into Professor’s hideout and put him on a gunpoint.

Hey readers, Can wait for more for season 5 to release but anyways you have to wait. 2021 will bring up the Money Heist season 5. Till then enjoy watching Season 4 and linger your excitement for season 5. I hope you would like this article.

Everything shared is just expected, no official statement has released yet for season 5.