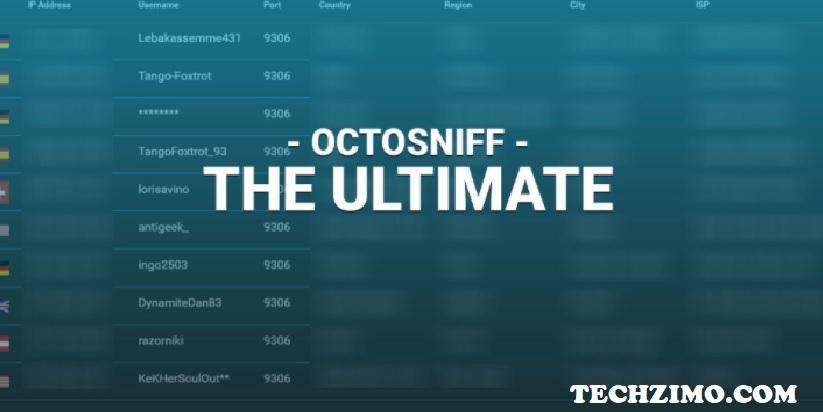 OctoSniff  IP Sniffer is an amazing network research tool that allows users to get information related to the other players with whom they are playing. the best thing is that the OctoSniff is available in its full version to download for free. This research tool works with almost all gaming consoles like Xbox 360, PS4/PS3, and Xbox 360/One. It also has a variety of exclusive features which we will disclose very soon. But these features are the gem part behind its immense popularity.

OctoSniff is basically a network research tool that currently runs or is compatible with only Windows. Right now it does not function with mac, Linux, or any other operating systems.

OctoSniff is a perfect tool that eases control over the entire network and also keeps an eye on the packets that are circulating here and there. In fact, it is equipped and backed with many complex algorithms that help the users to get all the details like where the packets came from, where are they going, why are they present on the network. Its popularity is increasing day by day, still, now it has almost 29k customers who are truly satisfied and happy with the performance factors of OctoSniff. But this is not limited to this number of users only, it is increasing on daily basis.

It has a huge buffer of features that mainly includes:-

Now many of you must be thinking that what is Sniff actually? why is it so important nowadays, right?

Let us give you a brief answer to this. Actually, Sniffer is a software or hardware tool that helps the user to sniff like a faithful pet, which basically means keep a track of all the internet traffic in real-time. It primarily collects all the data that is flowing in to and fro motion. That means the traffic that is transferred from your system or transferred back to your system. It keeps a complete track of all this.

OctoSniff Exclusive Features At a Glance

The OctoSniff has numerous features that make it stand out from other sniffers in the market. It works pretty well and is completely able to decrypt all sorts of packets let us say Xbox Chat and game server IP.

It bundles up some very cool features like the advanced filter method. This advanced filter method helps players in multiple ways. Since finding the appropriate game as per your taste and requirement is not an easy task nowadays since millions of games are present n the internet. So at those times, when you are craving heavily to play a game but of your interests and compatibility only then this tool works wonders for you. many users generally look for the game for which update is not required, so if you are also one of such users, then this tool can miraculously help you.

This feature also helps the users to recognize packets by default without doing any manual actions. So users don’t have to bother anymore that from where does the particular packet come from, which packets had come from the server IP, or is it coming from the chat?

Actually, the designing of this tool has been done this way that even a non-technical person who is not well aware of tech actions, can also easily operate this tool and can gather all important information required from the tool himself without any assistance of tech giants. Its interface is so user-friendly that even a kid can easily handle this. Its user-friendly Graphics users interface is also another reason behind its surplus popularity.

Moreover, it also comes equipped with some powerful and dynamic filters that help users in every detection and sorting.

In fact, its PS4 decryption is also an add-on feature that helps users to find and match usernames with their allotted IP addresses.

Why we should use OctoSniff?

OctoSniff has proven that it is to date one of the best sniffers when we talk about PS4. This tool performs amazingly well and helps the users to find out other users with their IP addresses and also tells us that which packages are roaming around which users in detail.

It works well with all the privacy and security concerns. It is perfectly able to handle a variety of issues. the best part is that it automatically comes with a useful and well-optimized VPN solution.

Also if we talk about the gaming environment, then also it works miraculously well. It puts no restrictions and gives all the support the ardent gamers require while playing. Moreover, it does not bother whether the user is connected via a wired or wireless connection. It performs equally well with both cases.

Here if you are on a hunt for some Ip address, then this tool is a great help for you. By using this tool, you can easily trace out the correct location of a particular user by just using the IP addresses of their systems.

In fact, if you want to change the IP address of a certain user, then also it can be done smoothly. all you need is to identify or recognize the address of the user without getting noticed.

For this, you have to make a quick search for the usernames of all the players that are available in the lobby in order to identify who is playing on the other side.

It also comes with an inbuilt ARP spoofing feature that allows it to function well both in wired or wireless connection.

Know all information about any player including (Country, IP, Game, and Platform)

Moreover, here users can get all types of information about the other user like ISP, country of the player and if we go on a deep search, then the exact city location can also be traced.

Games compatible with both IP and usernames

Games supported by IP only

As told earlier, it works well with both PS4 and XBOX. Let us know more about it.

Hey readers, this is all about OctoSniff and its features. I hope now all your questions have been answered by us. If you still have any doubts or queries, do write to us in the comment section below. We would happily answer that.

If you found the post informative enough then do share it with your near and dear ones.

Stay tuned for more such updates.

Related Topics:OctoSniffOctoSniff Exclusive Features At a GlanceOctoSniff Game Compatibility ListWhy we should use OctoSniff?