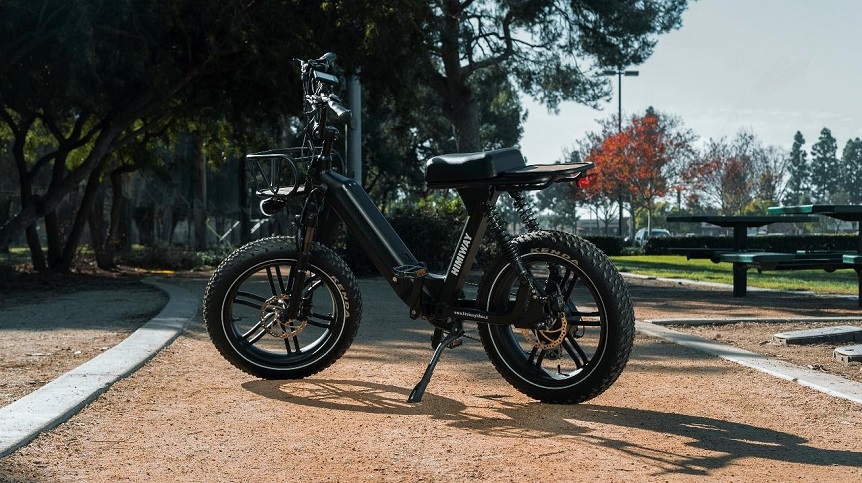 I’m an old user of an E-bike. Since 2015, I’ve tried all kinds of e-bikes. Over the years, I’ve repeatedly handled more than ten bicycles, running through urban, mountains and snow terrains. At present, the Escape of Himiway is often used by me now, which is a brand from China. The overall experience is amazing. Fat tire is especially suitable for off-road use.

Recently, I am writing an article about my experience in using E-bike in recent years. I hope to share it with more friends who like E-bike so that they can meet as few problems as possible in the use of E-bike, and do not take the detour I took.

The topic to share today is very practical and specific. It is a problem that any old player of E-bike will encounter, that is, how to rust the old E-bike.

Electric bicycles are used outdoors all year round. Even if they are made of rust-proof materials, they may rust. Rust will not only affect the appearance, but also the use. Last year, I almost fell off the bike because of internal rust but I didn’t deal with it in time. At that time, I realized that rust removal is necessary but repetitive work.

In most cases, the degree of rust is relatively slight, and you can handle it at home. Here are several common rust removal methods, which can remove rust without damaging the electric motor.

Oil, no matter what becomes less greasy than it used to be, you can always trust oil, from the creaking latch to the keyhole that prevents the key from being inserted. Of course, including the bicycle chain of our E-bike, put a drop of oil on each link, take good care of each link, be impartial, and then wipe it with a cloth, and some slight rust can be disposed of. This applies to most of the rusty chain unless it’s too rusty to ride! After finishing the oiling, rotate the pedal to see if there is still exist a sluggish situation. If it still feels wrong, check the bike chain, and I bet that you just missed one or two links.

It has been rumored that baking soda is an effective way to remove rust. The steps on the Internet are generally to mix baking soda and water in a bowl, then apply baking soda solution directly on the rust for about 15 minutes, brush off the rust with a toothbrush, steel ball, etc., and then wait for 10 minutes before wiping off the solution with a clean, dry cloth. I’ve tried this method before, and it turns out that the effect is not ideal. I went to search the ingredients of baking soda, only to find that baking soda is an alkaline substance, and the rust removal effect of using it alone is very limited. After exploration, I found the real rust removal method of baking soda: mix baking soda with white vinegar, and then repeat the above steps, so that the rust will go away like a pupil just after school.

Another rust remover is something you can’t imagine, but it really can. Open your refrigerator, I guess you can see that lovely red cans. Yes, coke. Here I especially emphasize Coca-Cola, is it because its effect is better than Pepsi Cola? No, it’s just because that I think Pepsi tastes bad. Facts have proved that coke contains a lot of acids, and acid is the enemy of rust! Coca-Cola can effectively prevent rust, it has strong acetic acid characteristics, it can decompose rust. However, coke is difficult to stay on the rusty surface. At this time, we need a spray bottle, pour Coca-Cola into the spray bottle, then spray on rusty areas, then wipe the rust with a brush or similar tools, so as to achieve the purpose of removing rust.

Now that a kind of beverage is mentioned, the appearance of the following beverage is not that surprising. Pour the citric acid solution into the steel wool cloth, and then wipe the rusty place, then rinse it with water, and then wipe it with a clean cloth, which is still the same process!

If you encounter very stubborn rust, you can try to use white vinegar, because the acid is stronger. Pour the white vinegar into the spray bottle, then spray it in the rusty area, spray it and leave it for 10-15 minutes. Rinse the vinegar and wipe it with an alcohol cloth. If the rust is really serious, you can remove the parts of the electric bicycle and soak them in a solution of white vinegar. This method works, but I don’t use it very often. It’s inhumane for a person who hates vinegar to work in an environment full of vinegar.

If the white vinegar solution cannot solve the rust, you can only use chemical rust removers, at least wait for 30 minutes, if it is serious, you can wait one night, and then wipe it with a clean cloth. Gloves, glasses, and masks should be worn to prevent poisoning or skin corrosion. In addition, do not mix chemical rust remover with baking soda, vinegar, citric acid, etc. This method is best used in the presence of professionals, but if your E-bike has been rusted like this, I suggest you buy another one!

Today’s sharing is all about this, and I will continue to share other experiences and knowledge about E-bike in the future!