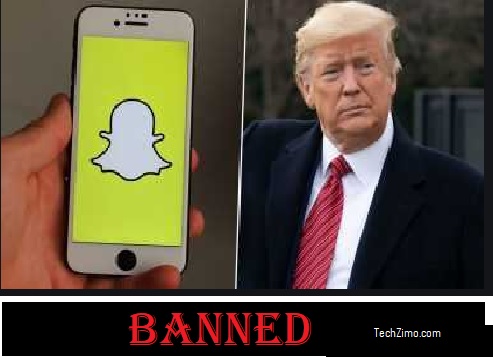 Yes, you have read correctly. The move has been taken to incite violence in the US Parliament House. Snap announced last week that it was indefinitely locking President Trump’s Snapchat account.

Snapchat gave the Trump campaign a particularly effective platform to target young users who are active on the service. A permanent ban will undoubtedly complicate his future business and political ambitions.

According to the reported report, a Snapchat Spokesperson said ” In the interest of public safety and attempts to spread misinformation, use hate speech and incite violence are in clear violation of our guidelines.

“Keeping this in mind, we have decided to permanently ban Donald Trump’s account.

Google and Apple pulled Parler apps from their shops for digital content shops stating that the right-leaning social network was allowing users to promote violence.

One source tells that the Trump account had attempted to violate policies “dozens of times.” After each incident, Snapchat immediately removed its content before it gained much visibility and sent warnings to its team.

“I do not celebrate or feel pride in our having to ban @realDonaldTrump from Twitter, or how we got here,”

Texas attorney general Ken Paxton on Wednesday said he is demanding that Amazon, Apple, Facebook, Google, and Twitter explain why Trump is not welcomed on their platforms.

The permanent ban officially goes into effect from January 20. It is the day when President-elect Joe Biden will be inaugurated as the 46th President of the US.

Shopify has taken down its campaign store. The company has also issued a ‘strike’ against his account, meaning he cannot upload new videos or Livestream content for at least a week.

Let me tell you that Snapchat is a messaging app that lets users post photos, videos, and messages. Messages appear momentarily before being made inaccessible.