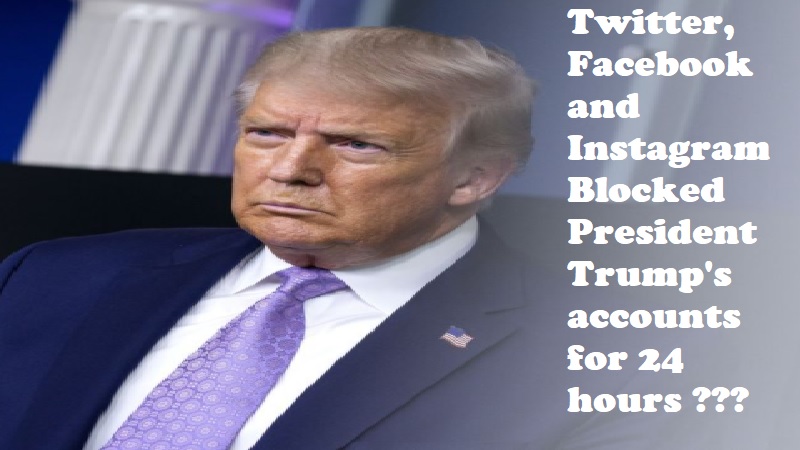 “We’ve assessed two policy violations against President Trump’s Page which will result in a 24-hour feature block, meaning he will lose the ability to post on the platform during that time,”

blocked his account by stating the same reason and it is now confirmed by Adam Mosseri.

The company also deleted some of the posts that were made by US President last night when the whole violence broke out into the streets of Washington DC.

In case you don’t know let us tell you that On Wednesday, Facebook deleted a post in which Mr. Trump was calling rioters to “go home” and he made a strange statement that “We had an election that was stolen from us”.

On seeing his actions and aggressive statements on social media platforms, protestors lost their control and started flooding into parliament house and started riots. Security managers handled the situation with very difficulty.

To this Twitter also came out and for the very first time, blocked Donald Trump’s account. But here also it is not for 24 hours like other social media platforms but locked his account for the next 12 hours. And the company also admitted Trump’s tweets to be manipulating and stated them “Severe Violations of Twitter’s policies”.

This is an emergency situation and we are taking appropriate emergency measures. Including removing President Trump’s video,” said Facebook vice president of integrity Guy Rosen.

“We removed it because on balance we believe it contributes to rather than diminishes the risk of ongoing violence.”

Reason behind the crackdown?

The crackdown arose just after Trump’s supporters stormed the US Capitol in an attack that led to one woman being shot. And killed by police, interrupting congressional debate over Biden’s election victory.

All this happened after the president had provoked his supporters to march on the seat of government. During a speech outside the White House. In which he cursed brutally and alleged baselessly that the election had been stolen from him.

Facebook, Twitter and Instagram all have stood together. And stated that “they don’t encourage violence at all” and will consistently work in the direction to remove such provoking posts.