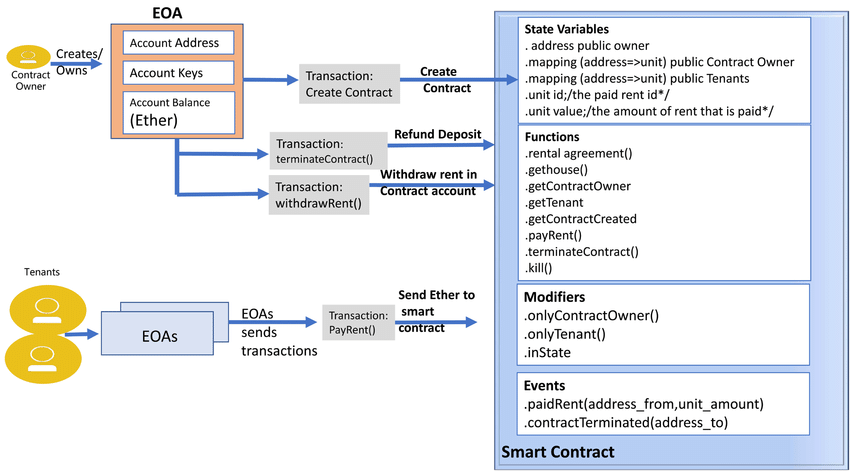 We all remember the difficult times of the global economic crisis in 2008. The so-called “mortgage crisis” significantly undermined the liquidity of banks, which stopped issuing loans. The U.S. government tried to fix the problem, but this led to the bankruptcy of 50 banks and financial institutions. Naturally, these events had a major impact on the stock market, causing stocks to lose more than 50 percent in price. All of these events spurred an increase in unemployment, and the middle class had to take the brunt of the blow. But the worst thing in all this is that the crisis became a global problem for the entire world, not just the citizens of the United States. It was for this reason that humanity began to invent and look for possible ways to function under its conditions without losing all that it had previously had.

What is a Smart Contract in Simple Words

In parallel with the crisis, blockchain is rapidly developing, and people are paying more and more attention to cryptocurrency and its study, as well as slowly beginning to master the use of smart contracts. So what is a smart contract? Before defining it, we need to understand how blockchain works.

So, a blockchain is a sequential and continuous chain of information blocks. That is, it is a kind of database in which you cannot change information, you can only add new information. For example, you buy 200 apple tree seedlings (you plan to grow raw material for cider, why not?) and enter this information into the system. Some percentage of them died for one reason or another. You will be able to enter that data, but you won’t be able to tweak the original data. In other words, blockchain is an accounting system that minimizes the fraud factor.

A smart contract is a computer algorithm that is executed by a virtual blockchain machine. It is designed to track and enforce the terms of the transaction (contract) between the parties. Transparency of its execution is guaranteed by the algorithm itself because once launched, it is impossible to stop the transaction or make adjustments.

In turn, the technology on which the principle of smart contracts is based has gone far beyond the cryptocurrency market. They are actively used by the healthcare industry, logistics and transportation companies, the food industry, the lending industry, and many others. All this is done in order to significantly speed up routine processes and virtually eliminate errors associated with the human factor.

How Do Solana Smart Contracts Differ from Others on the Market

When talking about Solana smart contracts, the first thing to say is that they are cutting-edge in the world of crypto projects. That is, they are relatively new, and therefore easy to use and feature-rich. To explain the advantages of using Solana, it is worth comparing it to its predecessor (Ethereum), which is also one of the leading crypto-projects on the market.

If you look from an end-user perspective, Solana and Ethereum are similar. Yes, the goal of the projects is to achieve the same result, but the ways to achieve it are still different. Starting from the programming language, and consensus models, and ending with development tools, the Solana blockchain is the first in the world to have an implementation environment for parallel smart contracts. Ethereum, on the other hand, can only handle one contract at a time. Solona deals with tens of thousands. The blockchain’s trilemma was also an innovation. It consists of the fact that a blockchain can have only two of the three characteristics (decentralization, security, and performance). In fact, the Solana has really taken a huge step into the future.

But, back to smart contracts, in which the aforementioned crypto project has also succeeded. The trick is that you don’t have to have any blockchain experience to create them. Developers can use the familiar C or C++ programming language, as well as Rust. In addition, developers can update and combine existing programs to create powerful new applications on their own. This means that the resulting product will run smoothly, quickly, and as productively as possible. Besides quality, from the point of view of the product development, the software gives an opportunity to confirm transactions immediately and with minimum costs, which is beneficial both to the businessman and each individual user. In a world of constant development, speed is almost one of the most important factors in moving toward the future. Ethereum, alas, cannot boast of such an achievement.

Smart Contracts Audit: Why is it Important?

So, let’s say that you’ve already decided to work with smart projects and are looking to the future with high hopes. Great! But, as always, there’s a “but”. Every system needs to be checked by professionals. Because of Solana’s “youth” and introduction of all sorts of innovations, few people really know how to implement them. Solana Security Audit will be a helping hand in this matter. The company’s specialists manually (!) check the code, using an audit tool to check for logic and compliance with all the terms of a smart contract. Don’t you agree, that even your computer needs to be cleaned and checked for viruses to work correctly, and it’s far from being a novelty? The main reason for needing to audit smart contracts is always the same, and that is irreversibility. Above, we already mentioned that once the project algorithm is in place, there is no stopping it. Accordingly, if mistakes are made, it is impossible to correct. And this, in turn, may lead to huge resource losses.

That’s why the company has professional auditors who detect errors before the launch and simulate possible protocol vulnerabilities. That is, they check the entire security system and eliminate weaknesses.

To Sum It Up

Innovation is what makes our quality of life higher and simplifies routine processes. Reformatting the economy has long been running and is persistently knocking on everyone’s door. It doesn’t matter whether you are an ordinary consumer of services or the owner of a successful business.