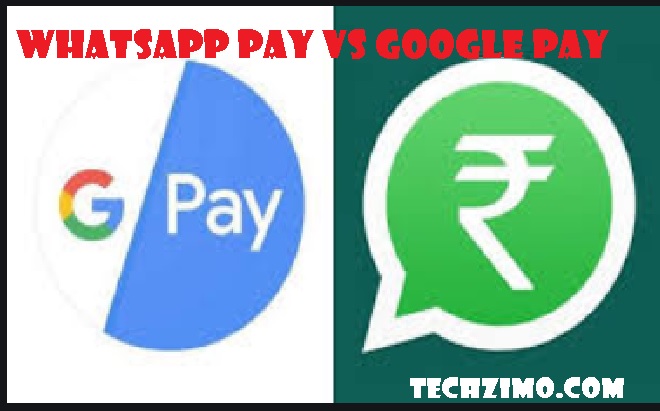 WhatsApp Pay vs Google Pay: Various State Governments have put lockdowns in their respective states to prevent the spread of Covid-19. And in these Pandemic times, if you are also worried to know how to perform the transactions, then don’t worry, there is a broad array of options for you to make or receive payments.

You have heard about or used many e-payment apps like Paytm, Google Pay but many of you may not be aware of Whatsapp Pay – Right?? Yes, that also exists, You heard it right.

Last year in February 2018, WhatsApp has launched its payment service in India. There are very few users who have actually used the payment feature in WhatsApp. Now WhatsApp Pay is all set to relaunch officially in India soon.

If Whatsapp Pay gets successful then it will be a great competition for its rivals like Paytm and Google Pay. Whatsapp is widely popular among Indians especially. If a person owns a smartphone then he must have Whatsapp installed on his/her phones, as it is very convenient to use. So if Whatsapp Pay becomes handy for users, then it can be another giant move for the company.

Now you must want to know which option is better for you – for this check out the detailed comparison of Whatsapp Pay vs Google pay prepared for you.

In 2017, tech giant Google has launched its peer-to-peer payment service called Google Tez for India. But after some time in August 2018, It was renamed Google Pay.

Whatsapp is a renowned name and has a great user base in India. It is not just a regular messaging app as it allows its users to send or receive payments from anywhere across India.  Its outlook is very simple to understand and access. Every age group is on Whatsapp nowadays.

We even don’t get to know, how it becomes an irreplaceable part of our lives. So if its payment feature gets rolled successfully then it will be a huge hit as people don’t have to get a separate app for this. The feature will be available in the existing WhatsApp mobile app only.

The Onboard process of Whatsapp is quite easier as compared to Google Pay. Since the reach of Whatsapp is more as compared to Google Pay. It has over 400 million active users in India only. And This payment feature comes as default with the regular messaging service app. But in order to pay through Google pay, users have to download a separate app and its onboard process is not much familiar in contrast to Whatsapp.

So here in Whatsapp Pay vs Google Pay: Whatsapp is definitely ahead !!

WhatsApp Payments comes with few restrictions. As of now, the service is only limited to peer-to-peer transactions and nothing much. Whereas, services like Google Pay, Paytm, and Mobikwik ensure users to pay bills and enable transactions with merchants and businesses as well.

So in terms of digital payments, Whatsapp pay is not enough. Users still have to install some third-party apps in order to pay bills etc.

So in terms of Transactions, payments, WhatsApp Payments will not be enough.

Free goodies attract everyone, Isn’t it?

We all are obsessed with free stuff. If we get Cashback and rewards, we get super excited. Since Whatsapp Pay has not officially launched in India on a larger scale, so initially it is not offering any rewards or cashback offers.

But the Google Pay and Paytm are well-established players in terms of e-payment services app. so they have many exciting deals to offer.

But that does not mean Whatsapp will lack this in the coming times as well. It will definitely have some great marketing strategies to attract users.

Whatsapp Pay vs Google Pay: Google Pay is ahead here.

Google Pay comes with multiple language support in contrast to Whatsapp pay. Whatsapp supports only English Language. Although many users are using Whatsapp as their messaging app when they have to perform any transaction, then they definitely will not be much comfortable with it.

The reason here is that Google pay supports various languages like Gujarati, Punjabi, Bangla, Marathi, Tamil, Kannada, Telugu, etc. So, People who are not knowing English may use WhatsApp as a messaging application but will not use it for transferring money.

It is obvious that this will give it more hits when we talk about making payments.

Whatsapp Pay is not much trustworthy since people used to get many fraudulent and spam messages every day. So chances are quite high of facing frauds in Whatsapp Pay as compared to Google Pay. Since Google Pay does not offer any messaging service so its reliability is more.

Conclusion: Who Is the Winner?

Here it is quite obvious that who is the real winner here.

But still, the winner is Google Pay as it offers not only peer-to-peer money transfer but also provides reliable bill payment and merchant services.

WhatsApp Disappearing Messages FAQ: How Will it Work?