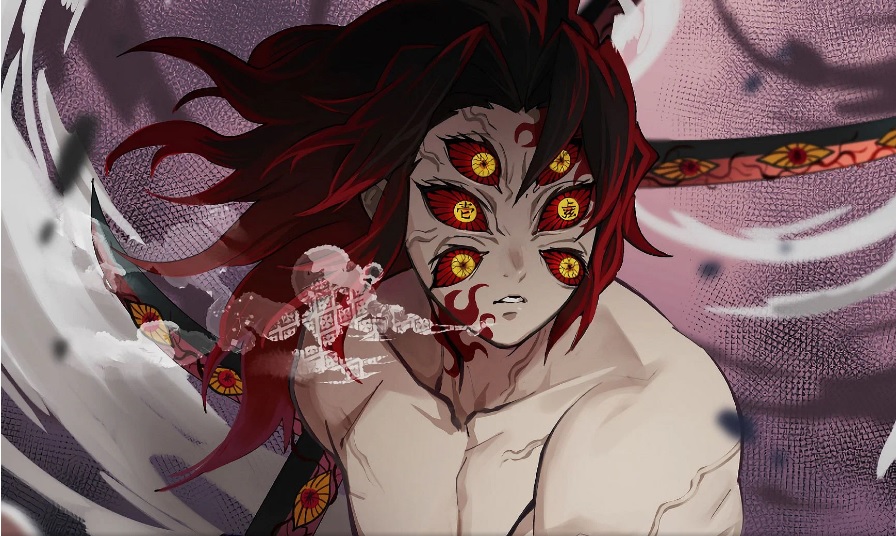 Fascinated to know about Kokushibo in Demon Slayer? Then you have arrived at the correct post. Kokushibo is the manga/anime series Demon Slayer: Kimetsu no Yaiba. He is Upper-Rank One of the Twelve Kizuki. Let’s quickly dive into everything about the Upper Rank 1 Demon.

His real name is Michikatsu Tsukiguni. He is the twin brother of Yoriichi Tsugikuni, the legendary Demon Slayer who is well known for inventing Sun Breathing.

Kokushibo learned the skill of a swordsman under the guidance of Yoriichi. Now, he became the second strongest swordsman to exist in the modern era. He always wanted to surpass his brother but alas he never did.

Once Michikatsu and Yoriichi went their separate ways as children, Michikatsu eventually settled into a content life as a husband and father. However, when Yoriichi suddenly appeared one day as an adult and saved Michikatsu from a demon, he was reminded of his childhood dream and abandoned his wife and children to become a Demon Slayer.

When Yoriichi joined the Demon Slayer Corps, none of them used or even knew about Breathing Styles, so Yoriichi taught them. Unfortunately, none of them, including Michikatsu, could master Sun-Breathing. Michikatsu came the closest with his Moon-Breathing, but his extraordinary skill was still nothing compared to his brother’s.

See also  EXCLUSIVE! Lara Dutta On Her Sabbatical: “There Wasn’t Anything That Was Coming Out Of Cinema That Was Giving Me Those Chills”

He has long black hair which he kept in a ponytail. Before his turning point, he shows no difference from a normal human.

However, after becoming a demon, his appearance significantly changed. Unlike other demons, Kokushibo almost resembles a human, except for his four extra eyes.

He has a muscular appearance and long black hair with red tips. Kokushibo also has Demon Slayer Marks on the left side of his forehead and the right side of his chin.

He wears a purple and black patterned kimono and a black hakama tied with a white cloth. This clothing is the same as what he wore as a human.

He is also the most loyal enforcer of the Upper Ranks of the Twelve Kizuki, willing to punish Akaza for breaking the rule and attacking Doma. Despite being a Demon,  Kokushibo relies more on his swordsmanship and Moon Breathing style techniques rather than using the supernatural Demon Blood Arts

Kokushibo is a serious person who loves to fight and never plays around. Kokushibo is also an honorable person who gives respect to opponents he considered worthy. He is a broken man who is sad due to his short lifespan. He is jealous of his brother due to his survival and wants to kill him of jealousy.

Powers and Abilities of Kokushibo

Like Tanjiro, Kokushibo has obtained the ability to constantly see the “Transparent World” through the use of his three pairs of eyes.

This allows him to see the muscles, blood flow, and joint movement of his opponents. He can accurately predict and anticipate the movements and attacks of his opponents with this ability.

While battling Sanemi and Gyomei, he even learned the ability to stay alive even after getting his head decapitated, which leaves the sun as his only weakness.

It is the most powerful and dangerous technique. It mimics crescent-shaped moons with every sword slash conforming to the shape of a crescent moon.

Enhanced with his Blood Demon Art, he can create many chaotic crescent moon blades when slashing that vary in length and size in crescent-shaped sword attacks.

Kokushibo himself had continued to develop this breathing style and had created over a dozen techniques over the centuries he had lived.

3. He is the First Demon Slayer who became a Demon

In the history of Demon Slayer, Michikatsu is the first Demon Slayer to become a demon. He was irritated for not being able to surpass his brother as well as fearing a predetermined death by awakening his Demon Slayer Mark. At last, he chose to give up his humanity after being convinced by Muzan Kibutsuji.

It took him around three days to transform into a demon as he used to be a breathing technique user. Apart from other demons, Kokushibo assimilated a heavy dose of Muzan’s blood, which makes him the strongest of all Upper Demons in Demon Slayer.

Unlike other Nichirin blades in Demon Slayer, Kokushibo can create his own katana with a detached appendage of his body. His Katana had a grotesque appearance to it, as it was fleshy and had eyes on it. Kokushibo’s sword is enormous in size and extremely sharp and durable.

Moreover, if his katana gets destroyed, he can completely regenerate it within seconds, which makes it ultimately indestructible.

Also read: How To Get The Dragon Communion Seal In Elden Ring (Step by Step Guide)