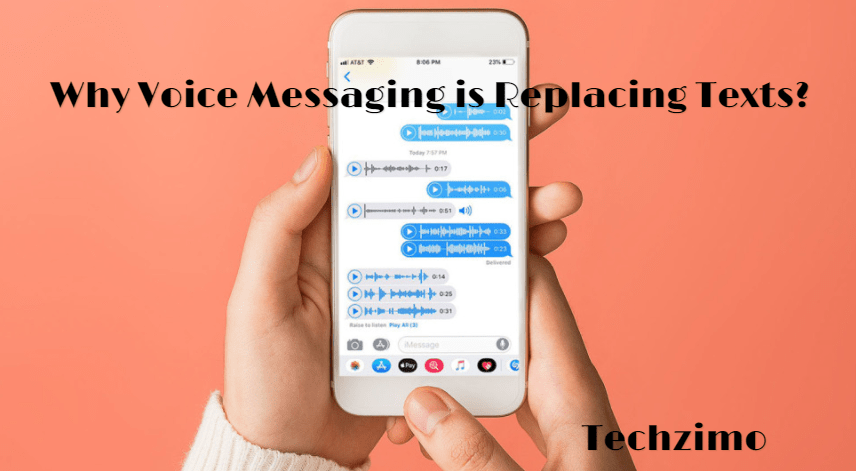 Since the beginning of time, people have been trying to find better ways to communicate. We’ve made text messages, emails, phone calls, and video chats. But still, people are reaching for the phone every day because it is often faster than typing a lengthy email or text message.

The next logical step in this technological revolution might be voice messaging. Voice messaging is quickly gaining ground on modern communication methods like texts and emails. It allows you to convey your thoughts while avoiding some common pitfalls while writing them out.

1. Voice messages are easier to write than ever before

The phone is still the most popular mode of communication because it works quickly and silently. It is advantageous when you don’t have time to type out a lengthy email or text message.

That’s why voice messaging is growing in popularity and replacing texts as the preferred method of communication for like-minded people who want to keep in touch while they’re on the go.

2. Voice messages allow you to convey tone better than any other form of communication

What we say isn’t always what others hear (especially over text), which is why voice messaging comes off more precise than anything else. People can listen to your actual voice instead of imagining what you sound like based on an emoji or something resembling your speaking style.

3. Voice messages save time and space

Sending a voice message is faster than typing out an email and doesn’t take up any space on your phone as texts do. That means you can keep more messages without worrying about running out of memory or using too much battery power to listen to them later.

Voice messages are worth a thousand words, especially if several friends try to reach the same person simultaneously.

Group chats work better when everyone can contribute their thoughts in a shared space instead of going back and forth via text messages alone which takes up so much time and energy to be used for something else more productive.

5. You can send short updates on your life instantly without any restrictions

Sending out a quick update about where you are isn’t always easy with texts and emails because of all the limitations involved, like character count limits and special syntax rules designed for specific subjects (for example, subject lines in emails).

Voice messages are unrestricted. You could use screen recording or video messaging, so you don’t have to worry about sticking to the rules set out by other forms of communication.

6. Voice messages are easier to keep track off

Modern devices like smartphones allow us to record voice memos that can be accessed anywhere or anytime you want instead of keeping track of an old-fashioned pen and paper. This makes it easier for people on the go to review important information at their convenience without having to remember where they wrote something down later.

7. You don’t need internet access, or internet data plan to send them

If you ever find yourself somewhere with no access, you won’t have any problems sending someone a voice message because all they will need is your phone number to receive it while offline (if they choose). It’s not like texts which need to be sent and delivered through a server online.

8. Voice messages are more personal than any other form of communication

People like hearing the sound of someone’s voice (even if it is their own) because they can get better insight into what the person is trying to say. This makes it easier to develop friendships since people can associate you with your voice rather than something impersonal like an email address or screen name.

Voice messaging allows for feelings to be shared in real-time without waiting for them to be translated into words before responding.

9. Voice messages work better when you don’t want anyone else listening in on your conversation

Sometimes there’s no need for anyone else to know what you’re talking about. It is better to keep voice messages private and away from everyone else’s ears in cases like these.

Voice messaging can be a safer alternative for communicating sensitive information privately without having to worry about it being spread around later by someone who might have heard it while eavesdropping.

If you have to explain your thought process in an email, the person won’t understand it correctly. It is even worse if you try to express yourself in the text since words can be misinterpreted easily. But with voice messaging, there’s no way they’ll misunderstand what you’re trying to say.

Voice messaging is one of the most convenient forms of conversation when we are talking about big teams. Stork.ai voice messaging app specializes in these kinds of things. It is the perfect tool for anyone who needs to share an idea or presentation they could not present in person. It allows you to do so without missing any vital information while still maintaining a professional tone of voice at all times!