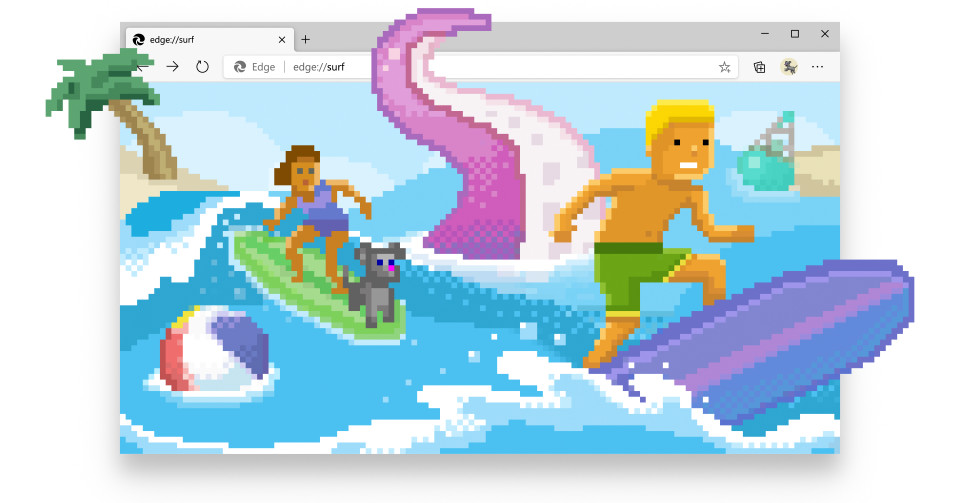 Microsoft created a fun Easter egg for its Edge browser to reveal the new logo last year, and it’s now available for everyone to play. The Edge surf game is very similar to SkiFree, a classic game that was released as part of Microsoft’s Entertainment Pack 3 for Windows back in 1991. While it was used as part of an elaborate Easter egg hunt, where Microsoft employees posted cryptic clues to a series of puzzles and images, it’s now an official offline game inside Microsoft Edge.

You can access it from edge://surf/ in the address bar in Edge. There are three modes available: a classic surf mode, a time trial, and a slalom mode where you surf between gates. The standard classic surf mode is an endless surfer mode where you have to avoid obstacles and a kraken chasing after you. Time trial is self-explanatory, but Microsoft has added in coins to collect so you can shorten the time and find speedy routes. The zig-zag mode is perhaps the most challenging, as you’ll need to hit every single gate, otherwise, streaks are immediately reset.

Microsoft has even added keyboard, mouse, touch, and even gamepad support, and local high scores are also included. The game has been available for testers since February, but it’s now part of Microsoft Edge version 83.