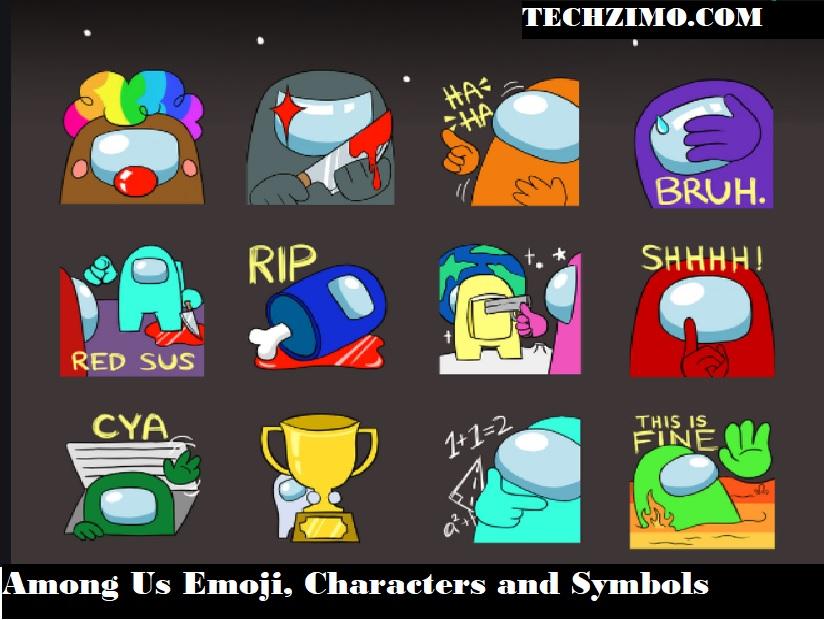 Looking for Among Us Emoji, Characters, and Symbols? then this post is for you !!

Among Us is a popular game that has a massive fan following. Moreover, it has a huge fan community that is filled with lots of content creators. So what this post will do – is it will give you some of the amazing hacks that will guide you to make an invisible username, how to copy and paste among us characters and emoji symbols combos for both Discord and Slack inspired by the game Among Us. Continue reading to explore everything about it.

Everywhere in the world, covid-19 vaccination is going on. at many places lockdown has been revoked and many places are still in lockdown. So meanwhile, if you are looking for some fun games then Among Us is definitely for you. As this is the perfect way to connect with your friends and family doing fun activities together although they are miles apart from you. Among Us is a perfect online multiplayer game that basically promotes deceiving your companions in order to win the game.

Now many times this question arises that what is so special about this game? why everybody is talking about it? In case you don’t know then let me tell you that this is one of the most played games all across the globe of last year. But what’s the reason behind massive popularity? And what does US Rep. Alexandria Ocasio-Cortez (perhaps better known as AOC) have to do with all of this?

So keep calm guys, as we are here to answer your all questions. Just read the entire post.

Among Us to soon get new hide and seek mode, new map and more

What is Among Us, and how do you play?

Among Us is an online multiplayer game that promotes social deduction in order to win this game.  It is developed by InnerSloth. Here also multiplayer mode works, so you can involve people ranging from 4 to 10 while playing the game. It doesn’t matter whom you want to add- it can be any stranger or your friend too.

In the gameplay. the player has to act as a crew member who boards a spaceship, airship, sky headquarters, or planet base so that he can keep your ship together and can return back to earth. But there is one twist that here one crew member got replaced by a parasitic shape-shifting alien whose ultimate goal is to eliminate the rest of the crew before the ship reaches its destination.

Here one character is an imposter, who looks similar to other ones and also sabotages the ship and do many tasks like sneak through vents, deceive fellow players, and try to frame others. But he never got recognized and kill off most of the members of the crew.

Whereas if we talk about the other non-alien members then they also perform tasks but their tasks are of constructive nature instead of destructive ones.  As the non-alien crew members fix the ship and usually can’t say anything unless death is reported.  After that, the surviving crew come into action and can debate across chat about whom they think is a real imposter and make guesses accordingly.

They together make guesses to vote off anyone claiming to be an imposter. As soon s the imposter is voted off, the crew wins the game. Isn’t it an amazing one?

How to play Among Us?

As we said earlier too, Among us game is all about survival. Here the only purpose of the crew members is to recognize the imposters and yo vote off them from the ship. In reverse, the imposter’s goal is to kill the maximum crew members before the ship landed at their destinations and complete all the tasks assigned to them.

What is ඞ Among Us crewmate symbol?

Actually, this Among Us emoji and character is very much popular and is taken from the Sinhalese language that usually makes a “ṅa” sound. It basically seems like a crewmate ඞඞඞඞඞඞඞඞඞ from Among Us.

Among us emoji combinations and phrases – Copy and Paste!

The internet is flooded with similar questions about Among Us emoji and combos. So here we are listing some of the popular ones. You just need to copy and paste them.

Note: You have to double click on Among Us emoji in order to copy.

Where To Find More Among Us Emojis?

Hey Among Us lovers, if you are looking for more emojis and characters, then you can participate in daily conversations like Discord and Slack and here you will also get to know the ways by which you can simply use these interesting emojis and can increase the fun quotient of the game.

How to get a blank name in Among Us game?

Well, many users keep us asking that how can they get blank names or make the usernames invisible? Well, that’s very simple folks !! The only thing you have to do here is to copy and paste a blank space into the name field.

If you didn’t understand the concept, follow the simplest steps given below in order to get the invisible character name or blank name.

Another shortcut method you can use is to just click on your name field and click on the space bar key of your keyboard. This will most probably do this work for you. Now you just have to copy and paste it in that.

How to put symbols in Among Us user name to make it invisible?

If you are thinking to put symbols in the username in Among Us game so that it can be invisible, then also it is possible. How? Just follow the steps given below to do so.

As we all know that emojis are one of the best ways to express our feelings or emotions. They work better than words and have a faster means of expressing what exactly we are feeling right now without using sentences or phrases. but these emojis are not easy to make. Yiou must either know the technique or the source from where you can directly copy or paste the emojis.

How can you play with the new Airship Map?

You must be aware that on March 31, developer Innersloth has come up with a new Among Us map which was later called  Airship map. It allows players to play on a free stage with some amazing add ons like more than a dozen rooms, new tasks, ladders, and much more opportunities to pick any room of choice. Here the spaceship map is also known as the Skeld. The Skeld is another option that most players are familiar with. When you open the app and start a new game, you should be able to select the Airship from the options at some point starting today.

Hey readers, this is all about Among Us emoji. I hope you would find the post informative and fruitful. If YES, then do share it with your family or friends. Also, share your views about these amazing Among Us emojis listed here.

Related Topics:Among UsAmong Us Emojiemoji combinations and phrases – Copy and Paste!get a blank name in Among UsHow to play Among Us?What is Among UsWhat is ඞ Among Us crewmate symbol?Where To Find More Among Us Emojis?