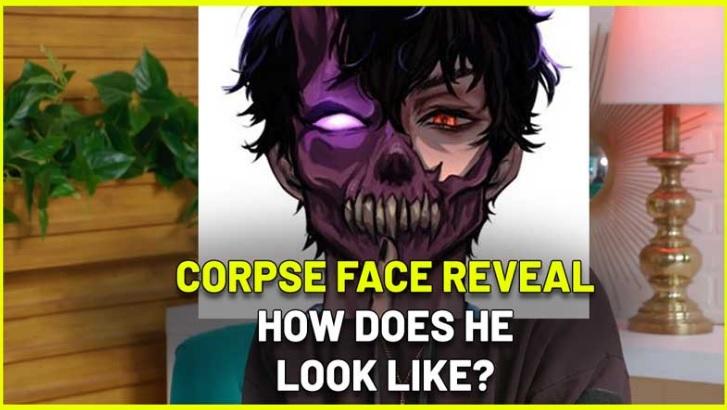 Corpse Husband is one of the most popular ‘faceless’ streamers on the internet. Despite being on YouTube for over five years, fans are waiting for the Corpse face reveal. He prefers to keep his life outside of YouTube a secret. Fans anticipated that Corpse might reveal himself in October 2019, after he teased it on Twitter. Alas, it didn’t happen and his identity remains a mystery…Many fans are curious to know about the Corpse face reveal.

He used to hide his face by using an anime avatar (featuring a mask) which looks apt because his content majorly focuses on narrating scary stories and Among Us gameplay. Now, the YouTuber and a musician have a good fan base with millions of followers from all around the world. He did this without revealing his face- How does he look like?

Corpse begins his career making predominantly horror game content and telling true crime stories. Soon, his popularity reaches the next level. He has 6.7 million subscribers on YouTube and has racked up 242 million views since his channel was created in 2015. He also has 2.3 million Twitter followers. He has achieved all this despite never appearing on camera.

Alongside content creation, Corpse also makes music. With 1.8 million Spotify followers and his most listened to track, E-girls ARE RUINING MY LIFE!, receiving over 180 million plays on Spotify alone, he is on course to be as popular a musician as he is a YouTuber and streamer.

What is the Corpse’s Real name?

Corpse Husband’s real name is not known, as the YouTuber keeps virtually all aspects of his identity hidden.

The only thing that we know about Corpse is that he was born on 8th August 1997 in San Diego, California USA. He is not comfortable revealing his identity to the world. He wants to live a normal life without interference. That’s why he never reveals his face to the audience.

Now, his die-hard fans are getting curious to get his glimpse. This mystery also helps him in gaining huge popularity. To maintain this popularity, he needs to keep his identity a secret.

His diehard fans who can’t wait to get a glimpse of his face can take a look at his…hands. Yup. Corpse Husband has posted images of his hands back in 2020 and the hashtag #onlyhands went viral on Twitter with over 35K tweets from fans, 8K+ retweets, and a whopping 73K+ likes.

The closest fans have gotten to see the real Corpse Husband is in a YouTube video with Anthony Padilla, titled “I spent a day with FACELESS YOUTUBERS.”

In the video, Corpse himself appears – but keeps his face covered by his logo. However, we can see his upper body, the most he’s ever revealed. He himself shared lots of pictures on Instagram, but in all these pics, he was covering his mouth.

In June, Minecraft star Dream called out people sending “gross” hate to random people after some claimed that they had found what the streamer really looks like.

Another mask-wearing creator, anomaly, accidentally revealed his face on stream briefly, before quickly ending the broadcast.

One of the Corpse fans shares a picture by saying that He is Corpse. But the looks and the appearance does not match the expectation of the fans. This picture gains lots of hated comments. Soon, some of his friends came to rescue him. Corpse never said that he is good-looking or attractive. Therefore, it is unfair to bash him for his appearance. After bad comments overlook, it is justified to keep the appearance a secret.

Moreover, Corpse’s Husband is someone who suffers from severe panic attacks and is known to have anxiety. He repeatedly mentions that he is not comfortable with face revealing. So, the fact that people are so “up in his business” that they would try to force a face reveal was outright disgusting.

The most recent glimpse into what he looks like, came in April 2022 when he posted a video to his official TikTok account. This was for his brand-new song POLTERGEIST!, which featured a pronounced shadow of his that showed off his famous curls. Later in the video, we also got a look at him crouching down in the middle of the road. Though his trademark mask and hand cover the majority of his face, this is the best look we’ve had at Corpse from an official source yet and may suggest he’s becoming more comfortable showing his face publicly.

What Illness does the Corpse have?

The corpse is currently suffering from a number of conditions, including fibromyalgia, sleep apnoea, and gastroesophageal reflux disease (GERD). Due to the combination of these illnesses, Corpse has previously said that streaming or gaming for long durations can leave him in serious pain.

Corpse also wears an eyepatch during streaming. Corpse further reveals in the past that he suffers from light sensitivity in one eye. “Every time I look at a screen for more than five minutes with my eye, it just gets completely inflamed and bloodshot, and hurts really bad for the rest of the day.”

The real name of Corpse

In January 2021 when a fan frequently asked about his name again, Corpse Husband claimed that his name is “Randall” and that he grew up in Virginia, USA. He also claimed he worked in an “automobile shop”, but he mysteriously warned his viewers “you’ll never find me.”

The thing that we know about Corpse is that currently He is 24 years old and born in California. He is a good musician and doesn’t want to reveal his identity due to his medical condition

That is all about Corpse Face’s reveal. Corpse Husband’s identity still remains shrouded in mystery with no apparent chance of a reveal any time soon. However, that hasn’t stopped the streamer from becoming one of the most famous faces in the community.

Also read: Who Was Mary Fanto? She Is Remembered at the End of ‘American Barbecue Showdown’