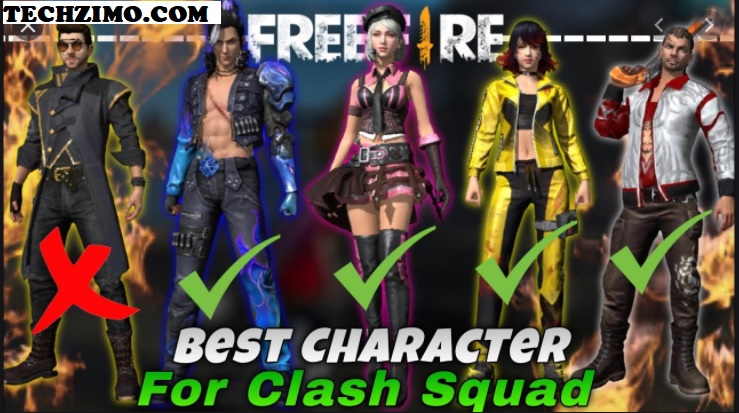 Hey, Gamers, I’m gonna share with you some exciting details about free fire characters, Many gamers don’t know which Character is best for you during a free fire rush Gameplay.

Not all characters in Free Fire are well-suited for clash squad gameplay. The characters have their own kit of skills that can be used in-game to gain advantages over the enemies in certain situations.

To assist players to make the proper choices, this article lists a number of the great characters for clash squad gameplay in Free Fire.

One of the best characters in Free Fire, DJ Alok is based on a real-life DJ and has some interesting powers that can make you unbeatable, if you know the know-hows. He is largely known for this ability called Drop the Beat in which he can surround himself with an aura that increases the ally speed by 10% and also restore 5 HP per second for a total of 5 seconds. This ability has a maximum expandable time of 10 seconds.

Moco is one of the favorite and liked Female Characters in Free Fire. It has a passive ability called Hacker’s Eye. Her ability is a passive one which tags the enemies that are shot by the user and also makes it visible to our allies. This skill can be easily used to spot the enemies in the smaller space being the reason why Moco’s skill can prove to be vital in Ranked and Clash Squad modes as well.

Chrono is one of the most powerful characters in Free Fire. He has an active ability called Time-Turner. At its default level, this ability creates a force field that protects opponents from 600 damage. Chrono force can also fire at opponents from inside the area. His skill has a cooldown of 50 seconds. His pace can confuse the enemies, and leave them strangled which is why he remains one of the top contenders for Clash Squad mode.

The character belongs to a middle-class, loving family. He lived in a city with skyscrapers that filled the skyline and felt trapped, so he started climbing to find places to see the sky. The character restores 25 HP instantly when the player kills an enemy with an SMG or a Shotgun.

The Special Survival Ability of this character is Sustained raids. The players can unlock Jota by spending 499 diamonds.

Jai has an ability called Raging Reload, which automatically reloads a gun’s magazine by 30% after knocking down an opponent. However, this reloading capability is limited to guns that fall under the AR, Pistol, SMG, and SG classes.

This gun reloading speed will come in handy in the Clash Squad mode.

Disclaimer: The pick of a character in Free Fire depends on different opinions, and prioritizing this over solely relies on a person’s playing style.

So, this was our list of the great characters within the game, we hope you discover the proper character for yourself. Happy gaming!

Clash of Clans Spring 2021 update – Everything We Know About the Next COC Update.

Sealed Super Mario Bros. sells for $660,000, shattering the record for the most expensive game ever.