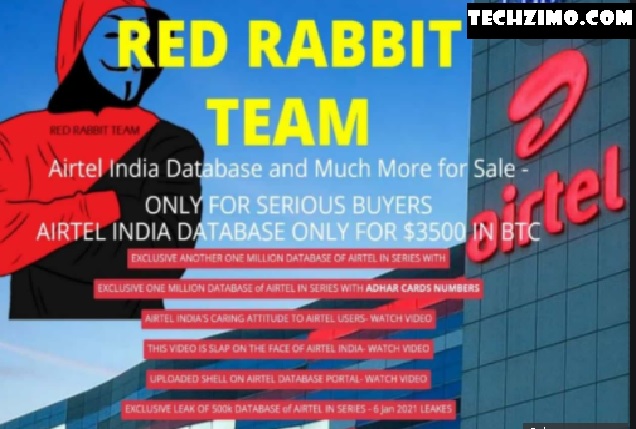 This is not the first time when Airtel’s user data has been leaked.

Hackers have claimed that they have access to pan-India data of Airtel subscribers and they only uploaded a sample of subscribers data from Jammu and Kashmir.

A recent review to verify the data and sample of phone numbers has been conducted and the result is very shocking- The data is related to the active subscribers of Bharti Airtel.

Hackers leaked data, are trying to extort money from the company.

They Unable to make money from Airtel- leaked data along with other personal details on the internet.

Data have been hacked and are being sold for $3500 in Bitcoin on the web.

“The hacker had access to the data and wanted to sell them, but could not succeed. Hence they dumped the data on the internet,”

They said Data have been leaked from a third-party source, not from the airtel side.

It took Hackers less than 15 minutes to find the bug, which could have allowed hackers to access user details. These days, hackers sell user databases to the highest bidder on the dark web.

A sample of the leaked database was shared by them which shows masked details of the subscribers.

The video shows that the hackers informed Bharti Airtel about the breach in December and demanded money.

Airtel company Claims there Is no data Breach at their end.

The Claims by the Red Rabbit Team are inaccurate, as a large Proportion Of data does not belong to Bharti Airtel.

They take great pride in deploying various measures to safeguard the privacy of their customers.

They already informed the relevant authorities about the matter.