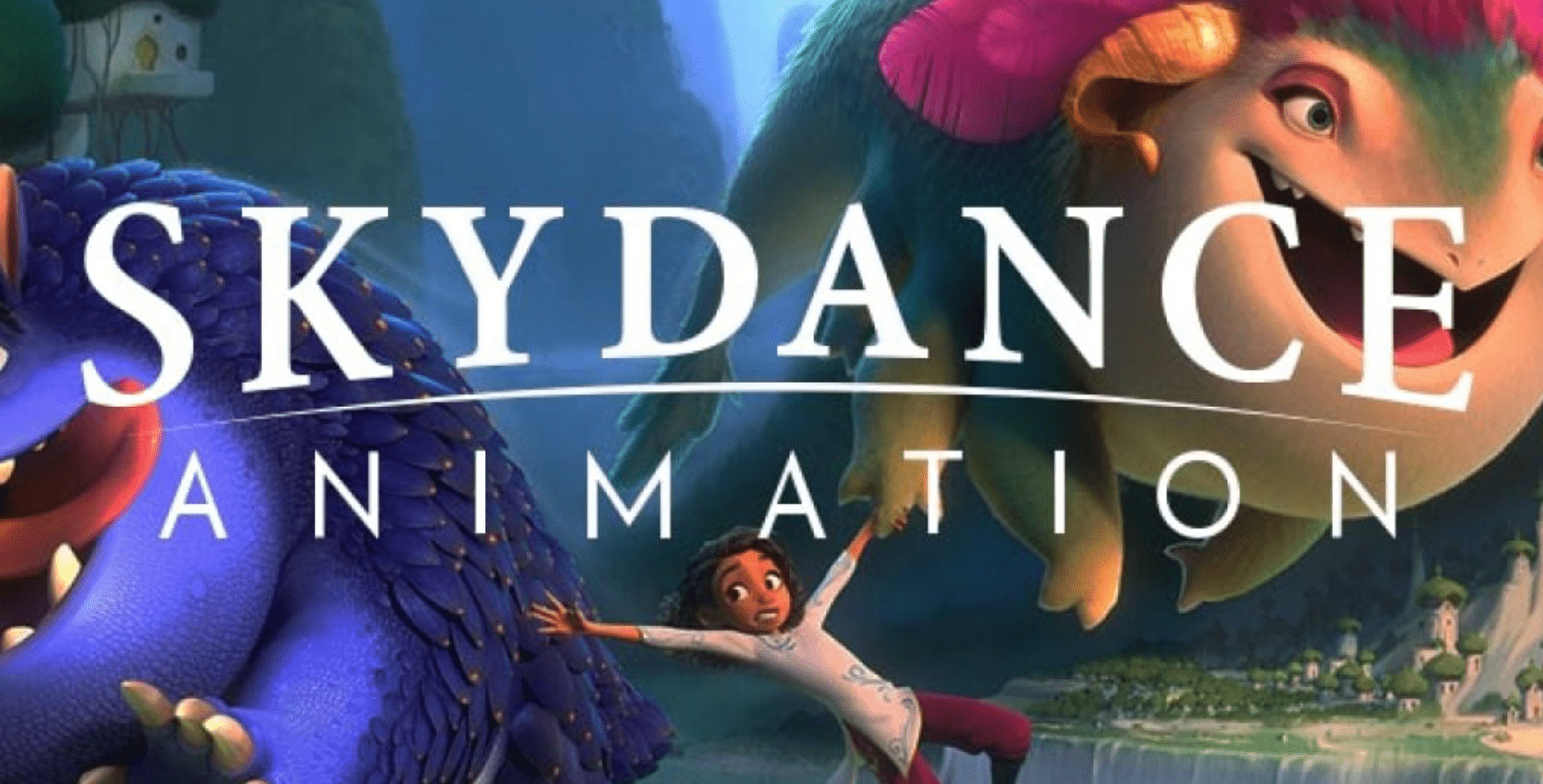 In the short years since Skydance Animation first began producing content, they’ve reached sky-high levels of success and forged an exciting future for themselves. Emerging as a division of Skydance Media, their first releases (Blush and Luck) set the stage for a full slate of upcoming projects including animated shorts, feature films, and their first-ever TV series. Following a new deal with Apple, all Skydance Animation productions will air on AppleTV+, available for streaming twenty-four-seven as the animation company builds its brand with toy deals and investments.

The inception of Skydance Animation began with Skydance Media, founded by David Ellison in 2006. The company entered a five-year partnership to co-produce and co-finance feature films with Paramount Pictures in 2009 and has renewed the agreement twice out to 2021. During this time, Skydance Media has become known for films such as True Grit, Mission Impossible: Fallout, Star Trek (Into Darkness, Beyond), World War Z, and the Jack Ryan series. When Skydance Media successfully partnered with Ilion Animation Studios in Madrid (started by animators and creatives Javier and Ignacio Dolset in 2002), the two merged to become Skydance Animation, one of the newest members of the Skydance divisions family. In January 2019, Skydance named John Lasseter (with a legacy of direction and animation at Disney/Pixar) as its head of animation. “John is a singular creative and executive talent whose impact on the animation industry cannot be overstated,” said John Ellison, CEO of Skydance. “He was responsible for leading animation into the digital age while telling incomparable stories that continue to inspire and entertain audiences around the globe… we look forward to John bringing all of his creative talents, his experience managing large franchises, his renewed understanding of the responsibilities of leadership, and his exuberance to Skydance as we continue to expand our animation efforts for the global marketplace.”

Skydance Animation first rocketed onto the scene with the short film Blush, premiering on Apple TV+ in October of 2021. This visually spectacular short tells the story of a horticulturalist/astronaut who crashed landed on a desolate dwarf planet, unlikely to survive in its harsh climate until the arrival of a whimsical creature with pink ribbon hair who brings the planet to life with flowers and vegetation. Story artist Joe Mateo wrote the plot in hopes of creatively coping with his wife’s death from breast cancer. Losing her was a metaphorical loss of oxygen causing very real panic attacks, during which his daughters came to symbolize life and growth, and survival. Hope. Mateo credits the head of animation John Lasseter for bringing the story successfully to life. “John reinforced the story I wanted to tell,” Mateo says, “And helped me elevate the core idea, being really clear and effective.” Blush was nominated for Best Short Film at the 2022 Hollywood Critics Association Film Awards, and won Best Original Score at the 2021 Hollywood Music in Media Awards, as well as the 2022 Music & Sound Awards. The film is dedicated to Mateo’s wife, Mary Ann R. Mateo.

Soon after the success of Blush, Skydance Animation (with John Lasseter as the head of the animation) released its first animated feature film Luck in August of 2022. The film centers around Sam Greenfield, an orphan followed by bad luck wherever she goes. When she finds a penny on the sidewalk, her luck seems to change just in time to help her friend get adopted. But upon accidentally flushing the coin down the toilet, Sam must befriend a black cat and follow him through a portal into the Land of Luck, where luck is both created and destroyed if she wishes to retrieve the good fortune this penny provides. In addition to Eva Noblezada who voices Sam, the film boasts a cast of Hollywood superstars including Jane Fonda, Whoopi Goldberg, and John Ratzenberger.

Though an undeniably impressive beginning, Blush and Luck are just that for Skydance Animation: a beginning. So, what’s next? First up is Spellbound, an animated feature musical originally titled The Unbreakable Spell. Much of Spellbound remains a mystery, but what’s been discussed of the plot suggests an irresistible adventure: Elian (voiced by Rachel Zegler), is a teenager who comes of age using her magical powers to defend her family when the opposing forces of light and darkness threaten to divide her kingdom. As she journeys to rejoin the disparate pieces of her kingdom, Elian will have to ask: Who cast the spell? Was it a ruler from a rival kingdom, a sorcerer slighted years earlier, or maybe even someone within the kingdom itself? Saving the kingdom will ultimately serve as a rite of passage, leading her to become the person she’s meant to be. In addition to Rachel Zegler, Deadline confirmed in June that cast members on this project include Nicole Kidman, Javier Bardem, and John Lithgow. The film will be directed by Vicky Jenson, most known for all-time fan-favorite Shrek. The script is written by Lauren Hynek (previously known for work on Mulan), Elizabeth Martin (previously known for work on The Christmas Ball), and Linda Woolverton (previously known for work on The Lion King and Maleficent). The original score for the film is by Academy Award-winner Alan Menken, with lyrics by Glenn Slater. Though a release date has not yet been announced for Spellbound, the film is John Lasseter’s most recent animated musical since the smash hit Frozen, and is likely to be an instant classic as soon as it hits the screen. Fans of Skydance Animation can also look forward to original titles such as Pookoo, The Search for WondLa, and Brad Bird’s Ray Gunn, all slated to hit Apple TV+ in the next two years.

Thanks to a lucrative deal with Apple Studios, all Skydance Animation features, shorts, and series will all be available for streaming on Apple TV+. Programming for kids and families has been a competitive race in the streaming wars, so securing Skydance is a victory for Apple TV+. The streaming service already is home to The Snoopy Show and Sesame Street Workshop’s Helpsters, with Fraggle Rock and Harriet the Spy from the Jim Henson Co. on the horizon, as well as a new series based on the stories and illustrations of Maurice Sendak. Skydance Animation, led by John Lasseter, is pleased to join the Apple TV+ repertoire with Luck, Spellbound, and a two-season order for the series The Search for WondLa.

As John Lasseter brings Skydance Animation content onto the Apple TV+ screens, toys based on the independent properties will be bounding to retail centers both physical and virtual. Skydance has struck a multi-year licensing agreement with Spin Master, the entertainment company behind children’s franchises such as PAW Patrol. The first set of toys produced from this new partnership will be based on Spellbound, including fashion dolls and vehicles featured in the film. “We are thrilled to be partnering with a company like Spin Master that is committed to quality and attention to detail as we are,” Skydance head of consumer products Luis Fernandez told Deadline. “We could not imagine a better partner to bring our visually stunning and epic animated worlds to life.”

To fuel Skydance as they continue to grow their brand across all platforms, they’ve completed a $400 million strategic investment round led by KRR—a first-time investor—and joined by the Ellison family, who remain the majority shareholders. Existing investors RedBird Capital Partners and Tencent also participated in the fundraising, which values Skydance at over $4 billion, setting John Lasseter’s future at Skydance Animation up to be as limitless as the sky itself.