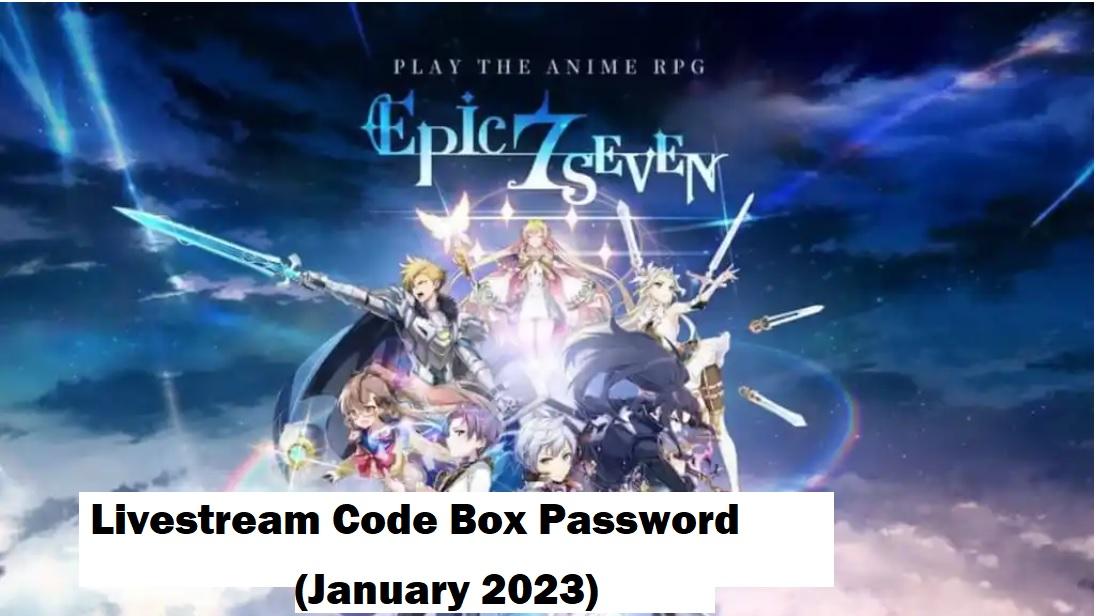 Epic Seven is one of the popular games that receive an overwhelming response from the Audience. The developers keep on adding new things to make the make interesting. The beauty of the game is that will give you plenty of in-game loot that will help you upgrade your characters. Epic Seven Livestream that take placed on their Official twitch Channel, gives a Password or Code that is used to open a Gift Box and unlock many rewards. Players are keen in Epic Seven Livestream Code Box Password for January 2023.

In order to get a hand on free rewards. Players need an Epic Seven Livestream Gift Box password in order to open up the gift. If you watched the Stream then the Password will be available in your mail otherwise you need to look for the code.

Epic Seven is the most popular mobile-based RPG game which is developed by Super Creative and published by Smilegate Megaport for Android and iOS. In this game, four players group together to form a team and battle against their Enemies. To win on the battlefield, players need to acquire many in-game items such as Characters, skins, weapons, and Armor by spending in-game currency. The players also receive a Selection of Heroes randomly that have their own unique strengths, and skills.

See also  World of Warcraft is getting a new expansion in April, mobile game in May

As the game proceeds, it becomes difficult to tackle the harder content. In order to improve their gaming, players can collect various equipment, charms, fodders, and artifacts. Fortunately, the game used to release several password codes is revealed Every month Epic Seven Livestream on Twitch. These Live codes will provide you with a bunch of helpful resources to smooth your gaming.

Every game has its own way to provide Promo Codes to the players. Roblox players rely on Gemsloot for the codes. However, as we discussed earlier, Epic Seven reveals several codes while Livestreaming on Twitch. These Livestream codes will really help you to get hands-on goodies for free. But what to do if you don’t have much time to watch Livestream on Twitch?

Well, for the ease of our readers, we have prepared the list of all the working Epic Seven Livestream Codes of January 2023.

Tip: These codes remain active for a short period of time. So it is recommended to redeem these codes as soon as possible.

Note: As soon as any new Code for January 2023 is released, we will update it here

Follow the given instructions to Redeem Epic Seven Livestream Codes:

The rewards you win will automatically be credited to your Account.

Q1: Where can you find more Epic Seven Codes?

Besides this, the players have a choice to join the official Epic Seven subreddit on Reddit for the latest discussions, announcements, Livestream chest passwords, and coupon codes.

Q2: How do you Redeem Epic Seven Codes on the Official Website?

Q3: How can you redeem Epic Seven Livestream Chest Codes/Passwords?

When you watch Epic Seven Livestream, you will find a Chest in your Mailbox, which can be opened within 3 days. The steps to redeem this Chest Code/ Passwords are as follows:

That’s all about Epic Seven Livestream Code Box Password for January 2023.  Epic Seven is a fantastic anime-style RPG game that keeps players engaged due to its unique gameplay. The developers keep son revealing new Codes for the players. However, these codes remain available for a limited time, and nobody knows when they will expire. Keep sharing the post with your friends too.

Thanks for reading!! For more information, Stay Connected for more latest updates