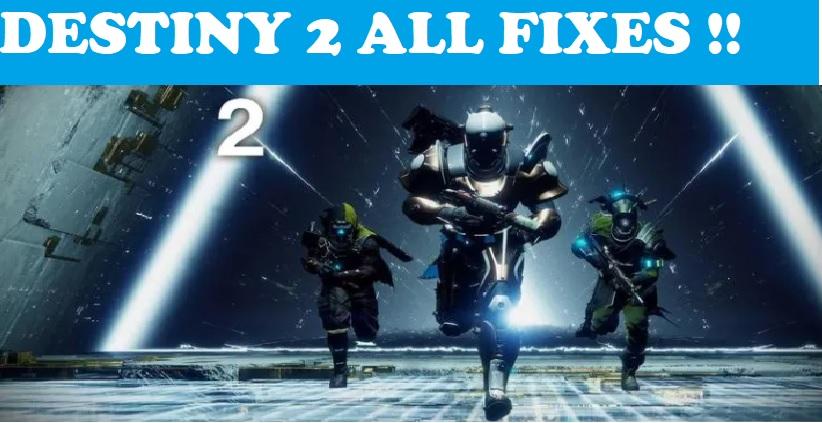 Destiny is an amazing game whose popularity is so huge that every day millions of users play this game. Here it is a multiplayer shooter game that is based on first-person. Destiny 2 holds a special place in avid gamers’ playlists.

It was released back in 2017 for PC users. But recently many users have reported some issues with the popular game Destiny 2. As we know, nobody is perfect so is technology. Many users have reported crash issues in the game.  There are two uses cases where crashes are usually observed. What happens actually is that – when users start the game, the screen turns black. It also happens that in the mid of the game, the system hangs and closes all the game settings.

And after trying to restarting it again multiple times, it gets fixed.  Many users have also said that even after trying to restart it multiple times, it didn’t start or if sometimes it starts then it starts hanging again within the next 5 mins of gameplay.  So what to do in that case? Don’t you worry readers, if that happens, as we are here to help you out with this post? Readout this one and get your answer crisp and clear. As here we will discuss all 100 % working methods that will help you to troubleshoot this Destiny 2 Crashing PC error.

Many players have reported that it is very much predictable to observe this error just after 10 mins of playing the game. Initially, the game use to get freeze and then automatically crashes. It usually displays the message “Destiny 2 has stopped working.” It usually recommends you to scan and repair Destiny 2.

It is not fixed that when will you witness the issue. It can happen at any moment. Sometimes it happens in the beginning while sometimes at the end or in midway as well.

What are the Causes of Destiny 2 Crashing PC Problem Issue

Well, there is not a single cause for this error to occur. There could be multiple reasons for this Destiny 2 error. The primary reason could be missing DLL files and corrupted system files. Moreover, there could be a firewall that is the real culprit behind this Destiny 2 crashing error. Insufficient memory space, memory overclocking could lead this issue to an intense level.

#1 Raise the priority of your game

#2 Run the Game with Administrator Privileges

It may also happen that if you run the game without administrator permissions, then also you may face a destiny 2 crashing error.  It does not matter much that whether you are using steam or abttle.net launcher. You should ensure that you can receive all the admin permissions whenever you try to run the game using the launcher.

Your Destiny 2 game may also crash due to a corrupted or out-of-date graphics card driver. So one thing you should be sure about is that you must have the latest drive er installed on your system so that all sorts of crashing issues can be avoided.  Don’t know how to update all the graphics drivers, don’t worry, follow the steps given below ;

Well, the main purpose of Fullscreen optimization is to improve the performance of the game usually when you run the game on a borderless fullscreen. Many users have reported this problem that this feature usually causes problems that lead to Destiny 2 crashing. If you want to cop up with this issue, then you can follow the steps given below :

So to resolve all such issues, you have to ensure that you have whitelist Destiny 2 from your antivirus. So, this would help the antivirus not interfere with the game function.

Destiny 2 crashing may also occur when you occupy your system a lot with lots of multiple programs running in the background. So the system also gets hanged and does not get enough memory space to run the game smoothly. So many programs can interfere with the functioning of the game.

This may also include utility programs provided by your hardware manufacturers that can temporarily overclock your components.

So you have to take care that all the unnecessary programs should be closed and then restart the game and check if it runs smoothly or not now.

Destiny 2 is coming to PlayStation 5 and Xbox Series X

This is all about Destiny 2 crashing Fixes. I hope this would help you out. Try out these fixes and do let me know which method worked for you.