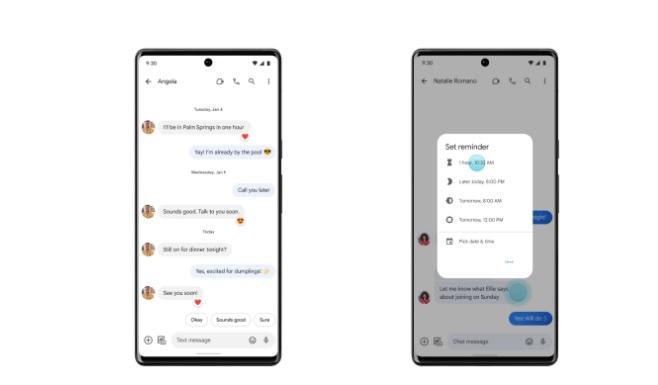 The Google Messages app received a massive update. The update includes a redesigned app icon and a host of new features. The users of Messages will soon be able to respond to an individual message in a conversation when RCS is enabled making it easier to keep a track of texts and remain in conversation without breaking the flow.

Google is bringing the ability to respond to individual messages in Google Messages. This is quite similar to how we respond to messages on WhatsApp or Instagram. This feature requires users to enable RCS on their smartphones

Google announces a feature that will enable users to see a transcription of a voice message in the Google Message app. Today, the company announced that this feature will soon be available on Pixel 6, Pixel 6A, Pixel 6 Pro, Samsung Galaxy S22, and the Galaxy Fold4 smartphones.

The latest Google Messages update allows you to watch YouTube videos within Messages without exiting the app. Furthermore, the app will also suggest that you “star” messages that contain important texts such as addresses, door codes, and phone numbers. It will help you track the conversation easily when required.

See also  Work from home for Google employees till September 2021

Google Messages now gets reminders within the app itself. It helps you remember important dates or events without having to navigate across other apps on your phone.

Google also said that its Messages app will now recognize texts like “Can you talk now?” and suggest a Meet call by showing an icon right next to the message. It will also suggest adding calendar events for messages like “Let’s meet at 6 pm on Tuesday”, to help users stay on top of important events.

Google has partnered with United Airlines to offer messaging on United flights when users have turned on RCS on their devices. “It will be available on United WiFi for most carriers starting this fall, with broader support coming soon,” the company added.