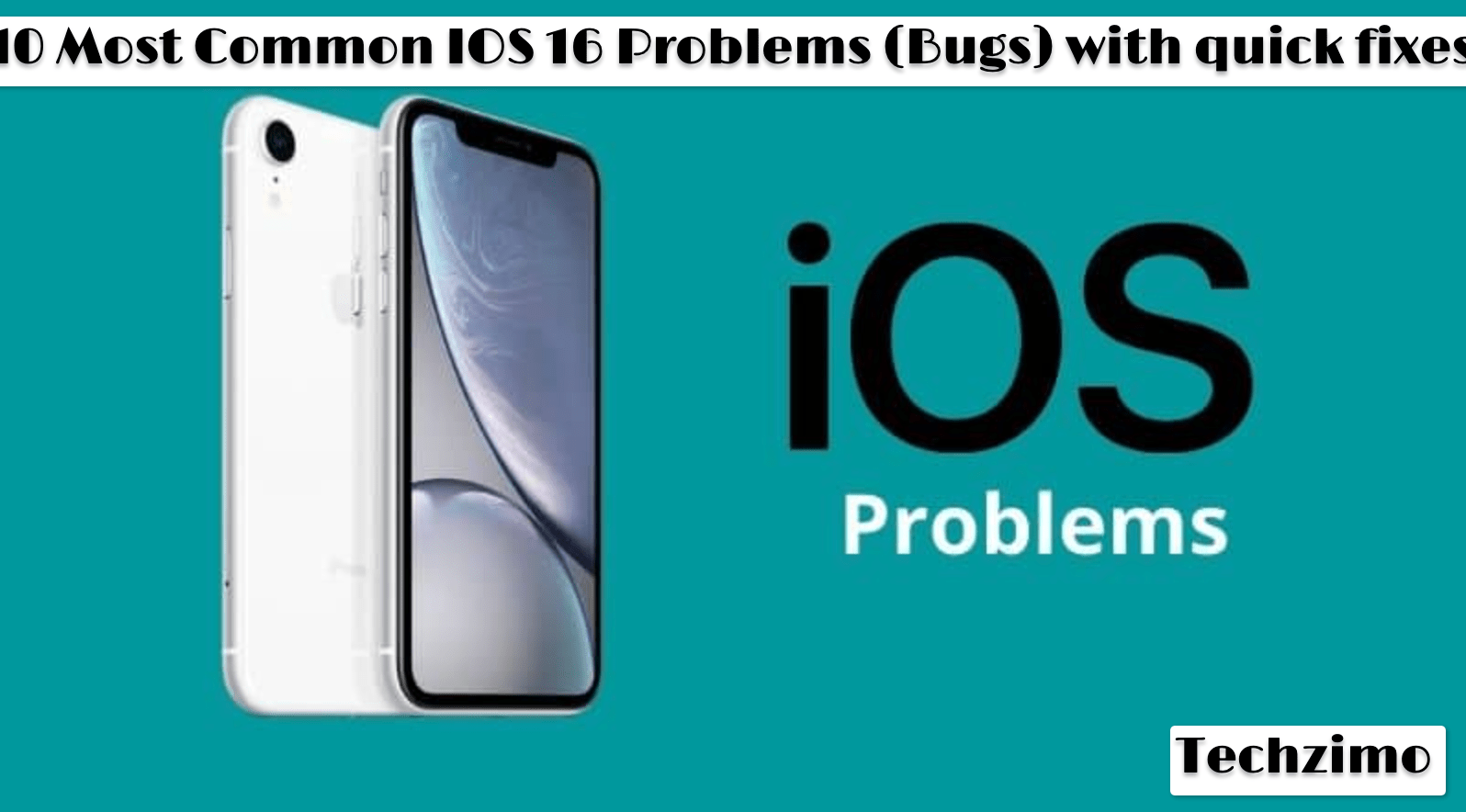 A few days prior, iOS 16 was revealed. iOS 16 is the most recent version, and it is being rolled out to all compatible iPhones. At WWDC 2022, Apple unveiled updates to iOS, iPadOS, macOS, watchOS, and tvOS (Worldwide Developer Conference). The newest iOS version, iOS 16, was unveiled at the same event. Now, eligible iPhones are receiving the stable iOS 16 Update.

The most recent iOS version has a lot of features and issues. These problems occur frequently. The majority of defects are often discovered and fixed prior to the stable release. The iOS 16 beta contains a lot of problems that have been found and corrected. Installers of the iOS 16 beta are the ones that test the operating system and notify the developer of any flaws so they can be repaired. On the beta version, some bugs might have gone unnoticed or never materialised. The bugs that were discovered following the stable release are those.

We also run into a number of issues with each new iOS release. Although they frequently still exist in the stable or official release, these problems are very prevalent in the beta release. For comparison, we encountered a number of problems in iOS 15 last year, which made it quite problematic. Many flaws, such as quick battery consumption, frequent app failures, connectivity problems, etc., were reported by many customers. Let’s examine typical issues with the future iOS 16 that we might experience.

Easiest and quick fixes of common IOS bugs from Techzimo.com

Let’s talk about the common issues with iOS 16 and how to fix them in this article. The majority of these issues are experienced by iOS 16 users everywhere. App crashes, battery exhaustion, connectivity issues, and several more issues are some of the drawbacks with iOS 16. Below is also a discussion of these issues’ fixes. The majority of fixes are easy and quick to complete. Therefore, without further ado, let’s begin.

We’ll walk you through the present condition of these issues in this guide to iOS 16 issues. We’ll outline possible solutions for the most frequent iOS 16 issues as well as some helpful resources in case you run into issues. We’ll discuss the status of the iOS upgrade as well as what to anticipate from Apple and iOS 16 moving forward. We’re here to assist you in resolving any iOS 16 bugs and glitches that you may encounter because they can ruin Apple’s otherwise gorgeous iPhone software update.

In previous article we have also explained the fixes of 15.7.1.

Here is a list of potential issues with iOS 16

Common Issues with iOS 16 and solutions

The most unreliable iOS release ever is reportedly iOS 15, according to reports. With iOS 16, we can encounter a similar level of instability. We might run into the following typical issues.

On iOS, battery life has long been a problem. Battery drain is brought on by ineffective battery use and poor app optimization. This is a serious problem that many users may experience.

Apple took a while to address the quick battery drain issue with iOS 15 before releasing iOS 15.4.1. Therefore, Apple might not fix the iOS 16 battery depletion problem until the fourth quarter of 2022. To some extent, you can manage the battery drain by toggling a few settings. It is advised to disable Location Services and Background App Refresh because they both consume a lot of electricity. Activate the Low Power Mode as well.

Every new release of iOS, including iOS 16, is made to function best with the most recent and updated applications. As a result, many users may experience app crashes, some of which occur during app launch and others during app use. By updating the older apps on your iPhone, you can get rid of it. You might try uninstalling and reinstalling the software if it is already operating on the most recent version.

The inability to connect to the internet has plagued practically every new iOS version. On iOS 16, there may be a problem with Wi-Fi connectivity as well. There are three approaches to deal with this issue.

Try turning the Wi-Fi on and off.
Connect after forgetting the Wi-Fi network. To do this, select “Forget This Network” by tapping the blue I icon to the right of the screen.
Navigate to Settings > General > Transfer or Reset iPhone > Reset > Reset Network Settings to reset network settings.
WiFi version 4 of iOS 16

For any smartphone user, an unresponsive touchscreen is by far their worst nightmare. And regrettably, there is no long-term fix for this annoying issue. But don’t fear; some fixes can temporarily resolve the problem.

Update any out-of-date apps on your iPhone, as was already mentioned. If the issue still exists, you can attempt forcing a reset of your iPhone, which might temporarily solve the problem. In order to hard reset your iPhone, follow these steps:

turning the Wi-Fi on and off.
Connect after forgetting the Wi-Fi network. To do this, select “Forget This Network” by tapping the blue I icon to the right of the screen.
Navigate to Settings > General > Transfer or Reset iPhone > Reset > Reset Network Settings to reset network settings.

On iOS 16 devices, this is a common problem. Text messages to Android users have reportedly been flagged as “not delivered” by users. This problem has also appeared in earlier iOS generations. This is quite annoying, especially if you use iMessage. Hopefully, Apple will acknowledge this problem and provide a software update to address it right now. You can attempt the following workarounds in the interim:

Method 1: Restore default network settings
On your iPhone, open the settings application.
Press General.
Choose Reset from the Transfer or Reset iPhone menu.
Tap Reset Network Settings after that.
Your network settings will be reset by this. Please be aware that all of your network information, including settings for VPNs and previously used networks, will be deleted.

Method 2: Ensure that you are using the right country code.
Make careful you prefix the recipient’s number with the appropriate country code when sending a text message. By conducting an online search, you can discover the code for your nation.

We advise taking the following actions if your iPhone is overheating:

Make sure your iPhone’s bulky case isn’t the source of the overheating. To do this, take the iPhone case off and test by using it for a few days.
Search for crashing apps on your iPhone. Your iPhone may be overheating as a result of several apps that are crashing in the background. Visit Settings > Privacy > Analytics > Analytics Data to verify. A frequent app crasher? Try another app after deleting this one. Alternately, uninstall the software and download it once more.
Update any outdated iPhone applications. Some applications might not update automatically. Overheating on your iPhone might be caused by outdated, buggy apps.

The problem with random programme crashes seems to have plagued many iOS 16 users, as well. Some apps seem to shut down immediately after launch, while others crash while being used. My understanding is that this problem can be resolved by simply updating the programmes, based on my experience. Apps that are out of date are considered to be problematic because they frequently experience problems like freezing and crashing. Update your apps, then. Delete the programmes and reinstall them if it doesn’t produce the desired results.

Update apps by tapping on your profile image in the top right corner of the App Store on your iPhone. Next, update all apps at once if that’s more convenient for you, or update each programme separately.
Delete apps by long-pressing the icon on the home screen, selecting Remove App, and then selecting Delete App.

Not to mention, unexpected sluggishness has become a major issue for certain iOS 16 users, but there are simple fixes available. Your workflow will be slowed down when your iPhone is unresponsive following the iOS 16 update. It also increases the risk of other serious problems, such as overheating and battery drain. Therefore, the sooner you solve this issue, the better. I would advise you to try these four tried-and-true techniques to fix this problem.

A complete app update Open Your profile on the App Store. Update all the apps on your iOS device after that.
Reset Every Setting To transfer or reset your iPhone or iPad, go to Settings -> General -> Reset -> Reset All Settings.
Refresh software: If there is a new update available, go to Settings -> General -> Software Update and install it.
Clean Up Your Device: It’s time to clean up the iOS 16 smartphone if none of the aforementioned solutions have been able to speed up your sluggish iPhone. The best way to proceed with this radical change is to check the storage usage by going to Settings -> General -> iPhone Storage section. Identify the apps that are consuming your storage and remove them.

The Common Issues with iOS 16 and Their Solutions are listed below. We sincerely hope this article helped you find what you were looking for. If you have any questions, kindly leave a comment below. Finally, please let us know if you discover any other iOS 16 bugs.