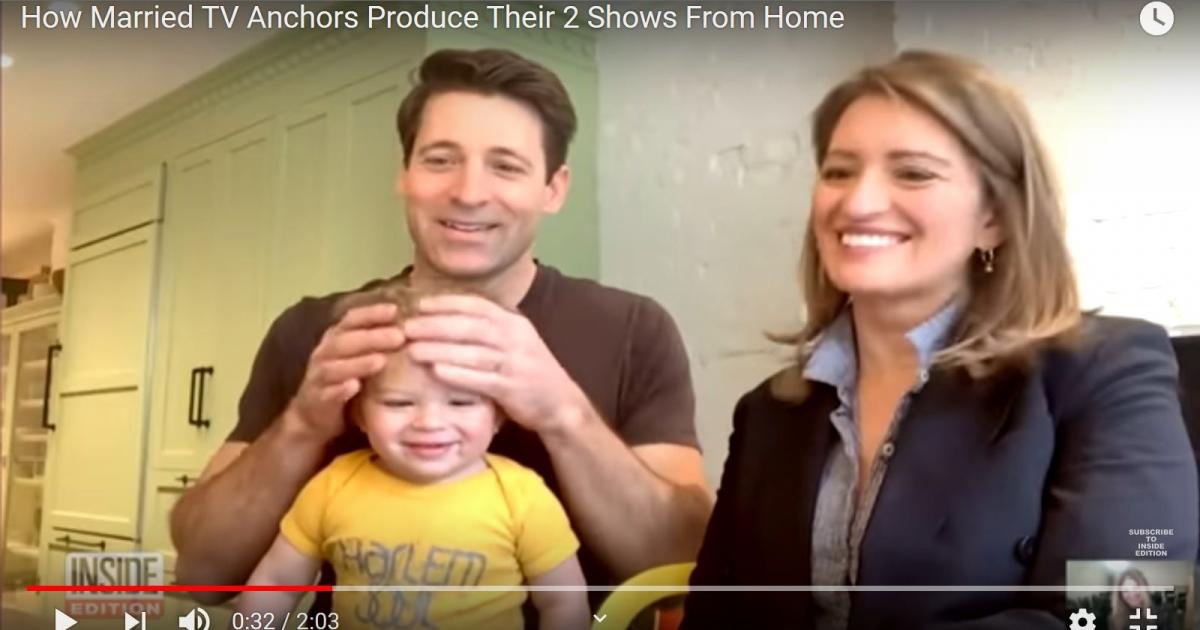 MSNBC anchor, Katy Tur, and her husband, Tony Dokoupil of “CBS This Morning” have read the phrase “challenging times” hundreds of times across their news scripts through the months of the coronavirus outbreak. As grim as the daily statistics seem to grow, the couple finds a reason to smile every morning, as Dokoupil preps for his early-morning stint as co-anchor alongside Anthony Mason and Gayle King, including a stop in the makeup chair, where his wife ensures that he is camera-ready, at least from the neck up.

The teamwork between the two is unquestionable, as Katy Tur takes her own anchor chair from the basement to pull her 2 PM ET shift for the afternoon.

Somehow, both working broadcasters manage to put two shows, from two separate networks, on-air from Monday through Friday, and as they demonstrated for their May 17 “CBS Sunday Morning” profile, they still have broad smiles. Their one-year-old son, Teddy, is partly responsible for their joyful countenance, but a partnership is central to their family and work success.

The entire television production empire was caught off its heels by the sweeping and necessary mandates in the wake of the coronavirus crisis. Suddenly, every major network converted to broadcasting from home, as every anchor fell under the watchful critiques of the Room Rater.

Katy Tur’s broad smile could barely fit in the basement headquarters of Broadcasting Central for the couple, as she described being “so privileged” to be the subject of her husband’s “Sunday Morning” assignment.

Tur was the first to launch basement broadcasts, but the ever-alert and sprightly journalist was a pronounced presence while she was embedded with the Trump presidential campaign. Katy Tur was “the one” who called out the candidate openly and on record for seeking the Russian release of Clinton e-mails, and thus, implicit meddling.

Katy was also manhandled by security at a campaign rally, where she was verbally threatened.

In her book, “Unbelievable: My Front-Row Seat to the Craziest Campaign in American History” the journalist chronicled her experiences, and her journalistic expertise was also recognized. Katy Tur earned the Walter Cronkite Award for Excellence in Journalism in 2017.

She married Tony Dokoupil in October of the same year, and her pregnancy with Teddy was tracked by her followers from her studio news desk almost to the minute of his birth last April.

A sweetly yawning Teddy contentedly sat on his mommy’s lap as he munched on cookies from daddy during the interview. Both parents shared their different styles in preparing for the day’s news.

A touch of the luster has worn off for Katy Tur, who loved that it was “novel and cool” give Tony Dokoupil his scripts every morning, while her hair was still in curlers. Now, that allure has become “not so much” in the chief assistant’s words.

Tony marvels at how Katy can multitask (a requirement for most new moms) while stationed at her laptop in the morning.

She, in turn, is mesmerized by his gift for preparation on a story and knowing the perfect statistic or piece of data to implant. “He’s a great researcher,” praises Tur.

Clearly, Katy doesn’t take on the role of wardrobe mistress for her casually dapper husband. She points out a makeup smear on his pants and the socks with sandals infraction in footwear. “It’s business above and Birkenstocks below,” Tony Dokoupil jokes.

Katy Tur has never shied away from frank commentary, and she confessed to one guest how she felt “stuck in a hamster wheel, lost in this house.” Forced domesticity does have its blessings.

Mixed blessings and mornings for Tony Dokoupil and Katy Tur

No one can fault Tony Dokoupil on his playtime protocol or preparation for floor time with Teddy.

Based on his frequent fatherly comments, the co-anchor remains an actively involved father to his two older children as well. Dad points out that neither he nor Katy Tur would have witnessed their son’s first steps under normal conditions, and of course, those joys are irreplaceable.

Katy’s favorite time of the day is “9:00 AM in the morning,” after Tony wraps up the early shift from his padded chair and joins the family for breakfast. In more normal times, dad is out the door at 4 AM.

Tony did get accused of sleeping on the job by some “CBS This Morning” viewers and non-viewers alike some days ago when a glance of the newsman looking down was caught during an impromptu shot. When Gayle King brought the matter to attention, Dokoupil described that his dozing stance was much more “head back and drool to the side,” as he said Katy could happily verify.

Not every up-close and personal family moment is fit for morning TV Shows.

Unity and love still rule the day for these still fairly-newlyweds and seasoned news journalists, who closed the interview in a loving embrace. Nonetheless, it didn’t take any prompting to get Katy Tur or Tony Dokoupil to say that they can’t wait to “go back to the office” and start living whatever routine is possible as part of the new normal. This family can testify that together can work, and usually, it’s better.