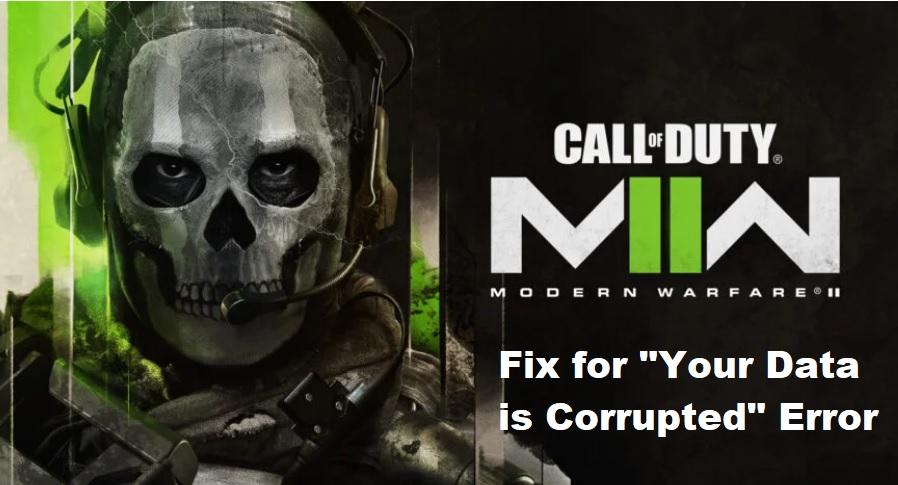 Call of Duty Modern Warfare 2 is the latest Gaming Community entry released a week before. However, when the players try to access the Modern Warfare 2 game, they encounter the “Your Data is Corrupted” error that bothers many players worldwide.

It is beyond doubt that the game Modern Warfare 2 arrives with spectacular visuals and realistic details. The publishers release the game after a series of successful beta testing. Beta testing aims to identify the bugs in the game and rectify them before the game’s public release.

It is very annoying when you plan to play the game with your friends, but you won’t be able to start your game.

Surprisingly just after the game’s release, the users are facing problems. The game prevents the players from booting up and asks them to reset their ranks. In this complete guide, we will discuss What exactly is Modern Warfare 2 Data is Corrupted Error and will share the quick and easy fixes to resolve this issue. So, read the post till the end.

This year’s installment, Call of Duty Modern Warfare 2, arrives with cutting-edge graphics, new campaign missions, and best-ever gunplay mechanics. Now, the players are complaining that they won’t be able to start the game.

What is Data Corrupt Error?

As the name suggests, the game has stopped working on several devices due to some corrupted game files. It is important to note that this issue is on the players’ side and not on the publishers. Mainly PS5 and PC owners are facing this issue due to corrupted files.

The latest Error Data is Corrupted is not new, as gamers face a similar issue in the previous titles. Most PS5 and PC players face this issue which can be solved with a few easy fixes.

In most cases, the game requires specific requirements to run correctly on the PC. We recommend you first go through the system requirements needed for the smooth running of the game.

Now, you must be wondering How to check your System Specifications?

Don’t worry! We are here to answer all your queries. Steps to check your System Specifications are:

See also  A Guide To Setting Up A VPN

If your device does not meet the minimum System Requirements to run the game. You need to update your hardware device. However, if everything is fine here, Don’t fret! Move to the next fix.

Restarting the device often solves lots of problems. We should give it a try.

The root cause of the problem is the missing files. The following steps will help to repair the broken data files and re-download any missing files on your device. Stream owners should follow these steps to resolve the issue:

We are sure these few steps will solve Modern Warfare 2 Data is Corrupt error.

That’s all details about Modern Warfare 2 Data is Corrupted Error.  It is indeed to say Modern Warfare 2 is one of the best games that is receiving an overwhelming response from the audience. There are speculations that the developers will resolve this issue before the game’s global release.