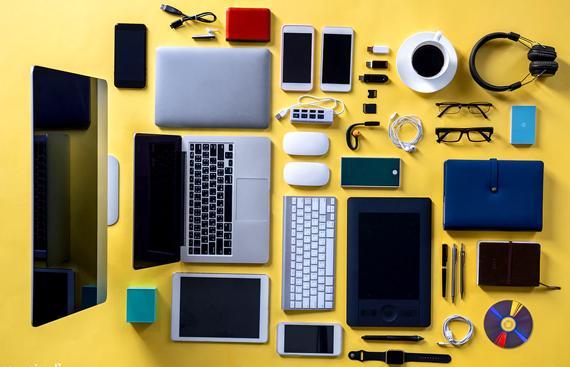 Every student has at least one smartphone, but that may not be enough to study successfully. Today we are going to tell you about gadgets that can simplify the already uncomplicated life of a student. No microheadphones, walkie-talkies and other junk, it’s already a past age.

Of course, you can write an essay without using a modern gadget – after all, not everyone is comfortable with new technologies. But if you want to get a good grade, it’s worth learning how to use a computer for academic purposes and how to find someone who can write my essay cheap.

It is this device is considered the first mass portable battery that can charge not only small gadgets, but also laptops. Capacity of 20,000 mAh, two USB-A and one USB-C port, support for Qualcomm QuickCharge 3.0 technology, which allows you to quickly charge your device.

In addition to charging Android devices, it is also possible to emulate the original adapter from Apple, which will allow you to charge “Apple” equipment as if from the native wire. And despite the fact that the device is on the market for more than a year, there are almost no worthy analogues in terms of price/quality ratio.

The verdict: An indispensable device for students who do not want to sit with discharged gadgets. With this portable charger you can charge anything: phone, laptop, electronic watch or wireless headphones, or you can do it all at once and even at the end of the day it is unlikely to run out of power.

I remember well how in my student days it was difficult to wake up for the first course, then merry parties almost until morning, then correspondence in social networks far after midnight, and in the morning all this turned into a painful rise to the hated peeping of an alarm clock. The Dutch company Philips decided to save us from this torture by creating a light alarm clock

See also  How to Become a Polyglot: Top Practices

Thanks to the smart system every awakening, if not becoming pleasant, at least will be much easier to bear, thanks to the effective work with light. The light alarm clock simulates the sunrise without the annoying loud and shouting sounds. Your ears will enjoy only the singing of birds, the rustling of leaves or the sound of waves in the morning.

The verdict: if you have problems getting up in the morning, and you want to smash the alarm clock like the hero from the movie “Groundhog Day”, then this purchase can definitely make your life easier.

Here it is, a real dream of students since the last century. Not only is this device capable of digitizing handwritten notes of a student or a teacher, but it can also transcribe human scribbles into electronic text. And, most importantly, the recognition rate is much higher compared to similar devices.

A plus would also be the built-in microphone, which allows you to make audio notes right during a lecture or recording your thoughts. Notes made with this pen can easily be shared on social networks or messengers, and externally it does not differ from its classic representatives. Despite the high price, you can buy one of these pens for the whole group, and then give it to one scribe who will take notes for the whole group.

The verdict: If I had had such a gadget when I was young, I would have taken it to the band without a second thought. Incredibly useful and economical thing, capable of simplifying the life of the whole group at once.

A true descendant of the smart pen, at least in terms of ideas. Unfortunately, it has not yet learned how to digitize the written word on its own, although they promise to do so in future versions. Now, thanks to the special markings on the pages of the notebook, you can instantly digitize what you’ve written with your hand with the help of an app on your smartphone.

The second feature is the special ink that comes with the notebook, which can evaporate in the blink of an eye, allowing you to start filling the notebook again with new entries. This is made very easy, you put the notebook in the microwave, 5 seconds and it’s clean. This operation can be done at least 5 times. It will be useful when you’re playing essay writer role and need to write your essay by hand.

The verdict: if you fight for the environment and also like to make small notes that you will definitely need later, then the gadget is definitely for you.

If a backpack, then definitely Bobby XD Design.

If you’re even slightly familiar with the world of backpacks and city bags, you’ve definitely heard of Bobby. In 2016, they blew up KickStarter and IndieGoGo, with their groundbreaking backpack and a few months later they had already launched it. Now, according to many ratings, Bobby backpacks are considered the best in terms of value for money. So as not to fill your head, we will simply list the advantages of the most famous and popular model XD Design with protection against pickpockets:

See also  Machine Learning in Education: Role, Use and Benefits

The verdict: What is the verdict. If you can, take it without hesitation. I took it myself and I don’t regret it one bit!

PuPScan is a handheld scanner

Despite what I said at the beginning of the article about all students having smartphones, and even with great cameras, they are inferior to this handheld scanner. In a couple of seconds, it scans the highlighted area, transfers it to your phone or computer, and converts it to electronic .docx format, allowing you to edit if necessary. Unlike classic scanners, which not all librarians allow you to use, PuPScan does not harm the paper, and fits in any student’s pocket. The only downside is the exorbitant price, but if you order one per group, it will be worth it, especially if you often run to the library.

The verdict: the most useful thing for those who often go to reading rooms and libraries.